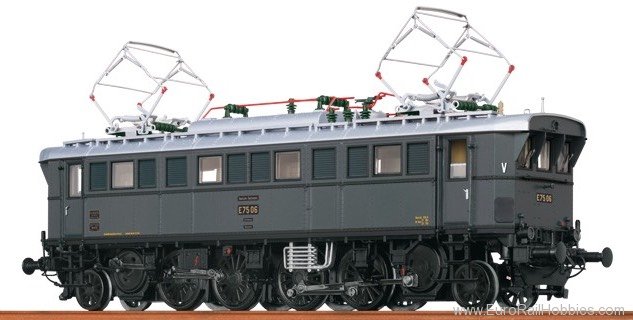 In 1926, DRG ordered further electric locomotives as improvements on the E 77 for operation in the southern and central German network. While the electrical systems remained virtually unchanged, a new, one-part vehicle frame was designed with the axle sequence 1A''BB1A''. The locomotive body was similar to the E 061 range. Due to the running gear changes, the maximum permissible speed was set at 70 km/h, raising hopes of better utility in mixed passenger and goods train schedules. 79 locomotives were planned. E 75 01-12 went to south Germany, while the E 75 51-69 went to Leipzig West, Wahren, Bitterfeld and Magdeburg-Buckau. As in 1943 all the E 75 in service in central Germany were exchanged for E 77 and transferred to Bavaria, almost all the E 75 remained in the western occupation zones. After 1945 at SBZ, E 75 07 and 58 were registered at railway depot Weisenfels; at least one of the two was requisitioned as a reparation payment and later bought back. After decommissioning war-damaged locomotives, DB owned 22 engines which were used in mixed service in the south German network. Three locomotives were modernised from 1960 and were fitted among other things with rubber-mounted front windows. From 1968, the remaining 19 tractive units were redesignated BR 175. The E 75 59 remained as E 75 09II and " ly almost restored to its original condition " belonged to VM Nurnberg. During a fire on 17.10.2005 it was severely damaged, but in the meantime it has been ly restored at DW Meiningen.