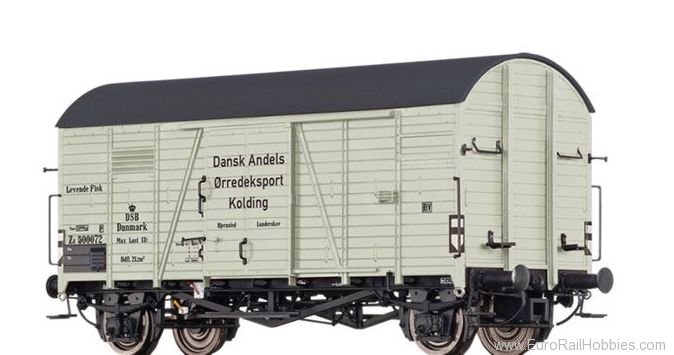 our price
$40.95 USD
Temporarily out of stock
(Available to order /pre-order) 
add to cart

The introduction of welding technology from 1933 onwards increasingly made the Deutsche Reichsbahn (DR) switch to joining the components of their wagons by welding instead of riveting. One of the main advantages of welding technology was the weight saving which could then be used for increasing the cargo weight. In order to respond to the demand for higher speeds in part-load traffic as well, the DR developed the Gs Oppeln, starting in 1936. Due to its wheel base of 6000mm, its maximum permissible speed could be fixed at 90 km/h. In addition to the missing junction plates that were made superfluous by the welding technology, this wagon type mainly differed in the pointed truss frame required due to the long wheel base. The increasing need for goods wagons due to the war led to the mass production of the Gs Oppeln from 1938 onwards. As a result, about 28,000 wagons without and 6,100 wagons with handbrake were built in the following years. Many of the wagons were equipped with a steam heating or even an electric heating system and could therefore be used as part-load wagons in semi-fast and express trains without any problems. After the end of World War II, the wagons were distributed all over Europe and could be found, for example, in the service of the railway administrations of Austria, Czechoslovakia, Poland, or Belgium. The reorganisation of the vehicle numbers of the young Deutsche Bundesbahn in the early fifties of the last century led to the change of Gs Oppeln into Gms 30. Some of the wagons even came into the EUROP wagon pool, thus serving on an international basis. With the emergence of the first newly built goods wagons at the end of the fifties, a decision was made against an expensive general overhaul of the wagons. When the UIC numbering system was introduced, the existing wagons were re-numbered into Glms 200, and some of them survived until 1979.