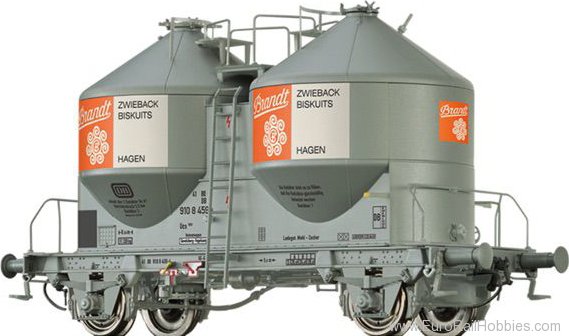 Sorry, this product is sold out and no longer available from the manufacturer.
Brandt is a registered trademark

Together with Waggon Union, Deutsche Bundesbahn (DB) developed a new twin-axle container wagon for powdered goods with two standing containers. Westwagon delivered the first 10 wagons to DB for testing in 1953. As they still had a Hik-brake system, these were designated as Kd 54. In addition, they featured a double-hook drive, as did the 150 wagons that followed from Talbot and Westwaggon. Since this led to problems associated with the unique undercarriage construction, all subsequent deliveries were equipped with running gear with single hooks. After only 50 carriages, the container volume was increased to 2 x 13.5 mÂ³. These carriages proved themselves with aplomb - by 1965, a total of 1,232 Kds 54 had been purchased. For lighter powdered goods, 1293 Kds 56 units with 2 x 17.5 mÂ³ containers were built in parallel. The extra volume of 4 mÂ³ resulted in larger containers and wagons that were correspondingly taller. To secure the parked wagons, some of the Kds 54/56 were equipped with a handbrake that could be operated from the platform. Unlike DB''s other newly constructed freight cars, whose hand-brake platforms were bolted to the undercarriage, they were directly integrated on these vehicles. In this way, the length over buffers of wagons equipped in such a manner remained unchanged and only the dead weight was increased. Compared with the total number of more than 2,500 wagons built, Kds 54/56 wagons equipped with a handbrake were comparatively rare. With the introduction of the 12-digit UIC number, the Kds 54 wagons were redesignated as Ucs 908, and the Kds 56 as Ucs 909. For many years, both types formed the backbone of the Deutsche Bahn''s powder wagon stock. The first reductions in stock occurred in 1967 when 86 wagons were sold. Further sales to EVA and VTG followed in later years. In the 1990s, DB AG relocated most of its wagons to its subsidiary MEG. The remaining DB AG wagons were mostly rented out or used, for example, for the internal transport of traction sand for tractive units. Other than cement, the wagons have also been used to transport several other powdered goods over the years. These include: stone dust, silica sand, kieserite, gypsum, sodium sulphate, Thomas sulphate, sugar, salt and aluminium hydroxide. The wagons were then generally home-based at a railway station.