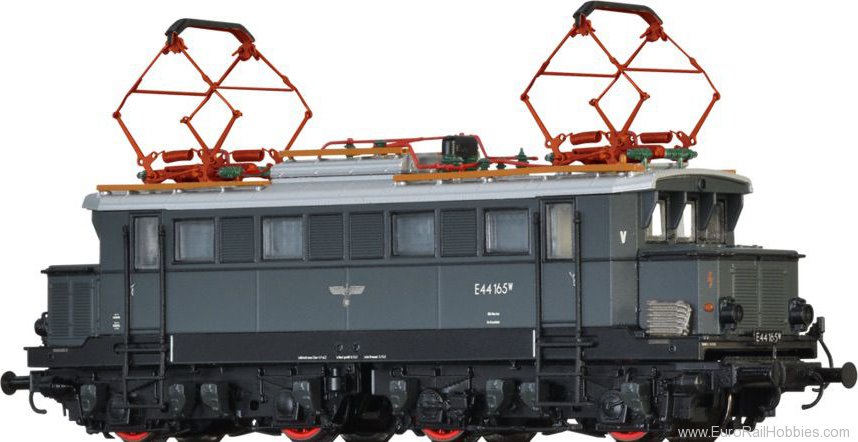 our price
$212.94 USD
Temporarily out of stock
(Available to order ) 
add to cart

At the end of the 1920s, it became clear that Deutsche Reichsbahn Gesellschaft  (DRG) would have to acquire new electric locomotives, among other  things, to accelerate its goods traffic. The need to increase maximum  speeds to at least 80 km/h could not be met with the most recently purchased  E77 and E75 series since the standard drive technology by means  of bars and additional trailing wheelsets did not allow for higher speeds.  The good experiences from abroad and with the two Bavarian EG 1 with  the Bo'Bo' two-bogie locomotives convinced the DRG to deviate from single- frame construction as well. The arrival of the world economic crisis in  1929, however, put a halt to this plan by interrupting the cost- intensive  electrical expansion of the lines, thus eliminating the need for electric locomotives.  The locomotive industry in Germany, however, feared falling behind  current developments due to this pause in procurement. They therefore  began developing a cheaper design at their own costs. Thus a prototype  with the designation E44 70 was created at the Siemens-Schuckert  Works (SSW) under the general management of Walter Reichel. This prototype  later became the E44 001. SSW was able to integrate its experience  with electric arc welding from its production of components for electric  generators into locomotive manufacturing, which led to significant savings  in materials and manufacturing costs. The prototype's positive test results  convinced DRG to further develop the new locomotive type into a universal  locomotive. The result was Germany's first two-bogie electric locomotive  produced in series, which can safely be categorised as the prototype for  the subsequently developed standard electric locomotive of Deutsche Bundesbahn  (DB). Due to the war the delivery of the locomotives, which were  registered for 90 km/h, stretched from 1933 into the postwar period, and  Henschel only handed over the last one, a E44 187G, to DB on 29 November  1954. The predominant distribution to central and southern Germany  led to the fact that approximately 100 locomotives remained in West Germany  and around 50 in East Germany after the war. The most conspicuous  design changes at DB were the lengthening of the roof shield for accident  prevention and the Indusi (inductive train control system) equipment. The  last locomotives, however, remained in service until 1985. Of the original  187 locomotives, only 21 still exist today, partially as museum locomotives  and as spare parts donors.