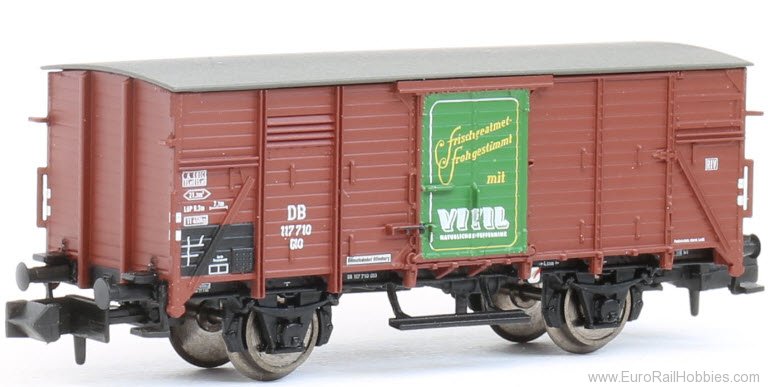 DISCONTINUED PRODUCT This product is discontinued and no longer available from the manufacturer. We have qty 2 available in stock in our store.

Tariff conditions on the one hand and technical conditions on the other resulted in all State railway administrations developing box cars with almost identical dimensions and payloads. These cars had a 4.5 m wheelbase, a length over buffers of 9.3 m for unbraked cars, a payload of 15 t, later 17 t and a floor area of approx. 21 square metres. This type of freight construction became the most important and most built box car; it originally had the type identifier Gm. The most common of these State railway cars, which numbered 47,533, were built according to the Prussian style sheet IId8. After the founding of the Deutscher Staatsbahn Wagen Verband (German state railway car federation) DWV in 1909, the federation car construction type A2 was developed from this. From 1911 a phenomenal total of 121,770 units were built, making it the most heavily produced box car. It dominated the image of the German goods trains until the early days of the third era. These cars were scattered all over Europe by two world wars, there were no European railway administrations where this type of car was not used at least temporarily. From 1938 the cars were reinforced in order to absorb the loads due to installation of compressed air brakes and the increased speeds. Diagonal struts were welded into the end panels, the front posts were partly rotated by 90 degrees. The last cars converted in this way were in service until the 1970s; afterwards they migrated into track repair service. Some of these still exist today, partly in museum railways.