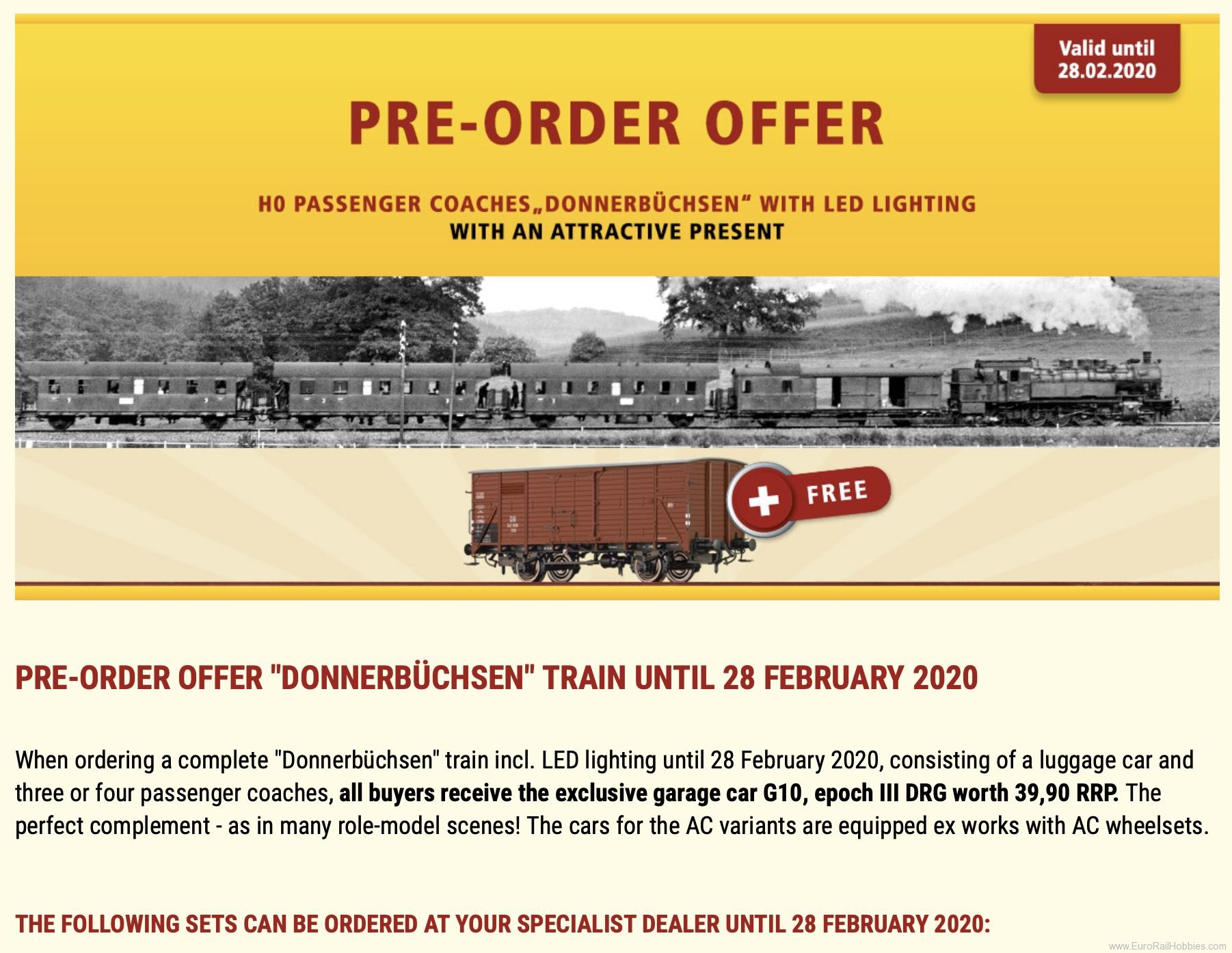 our price
$424.96 USD
Temporarily out of stock
(Available to order ) 
add to cart

When ordering a complete "Donnerbüchsen" train incl. LED lighting until 28 February 2020, consisting of a luggage car and three or four passenger coaches, all buyers receive the exclusive garage car G10, epoch III DRG worth 39,90 RRP. The perfect complement - as in many role-model scenes! The cars for the AC variants are equipped ex works with AC wheelsets.

The development of the two-axle standard corridor carriages of the “Austauschbauart” (a design based on standardised components) was closely linked to the production of standardised railway components, which emerged as a key industry in the 1920s. The DRG (Deutsche Reichsbahn Gesellschaft) had set itself the goal of having wagon components manufactured on a cross-company basis in accordance with standardised specifications and conditions, in order to drastically reduce the cost of subsequent maintenance at its own works and to ensure the use of interchangeable components. Against this background, the DRG commissioned the Gesellschaft Deutscher Waggonfabriken (D.W.V.) to develop and deliver the required standard corridor carriages.

The specification for the standardised wagons of the “Austauschbauart” meant it was no longer necessary to produce around 1,400 drawings for each individual wagon class. Instead, there was now one basic type that provided the basis for the modified designs, which required approximately 150 drawings each. Starting in 1928, almost 5,500 cars of the various classes BCi-28, Ci-28, CDi-29, Pwi-28, Ci-29 BCi-29, Pwi-29, Bi-29 and Ci-30 were produced for passenger transport in several delivery series. These wagons met the expectations of the DRG and meant that many older state railway cars and related classes could be decommissioned. The running characteristics of these coaches, which were not particularly satisfactory for the passengers, soon earned them the well-known nickname “Donnerbüchsen”. The turmoil of the war years inevitably led to the two-axle standard corridor carriages subsequently finding their way into the inventories of many European railway companies. However, they all shared a common fate – by the late 1960s and early 1970s all of these carriages had been removed from the general maintenance stock. The cars that still exist today serve as very popular attractions at various railway museums in Germany and abroad.