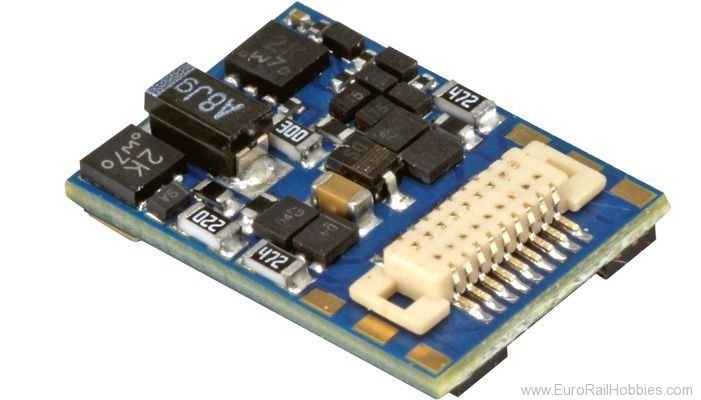 our price
$40.95 USD
Temporarily out of stock
(Available to order ) 
add to cart

The LokPilot 5 Fx micro and its "twin" LokPilot 5 Fx micro DCC are versatile decoders with a Next18 interface on a footprint of 13.0mm x 9.2mm. They are used in all vehicles of nominal sizes N to H0, which do not have an engine output, but should still be able to switch light effects.

Modes
The LokPilot 5 Fx micro is a multi-protocol decoder. It masters the DCC data format as well as Motorola and Selectrix. In DCC format, 14 to 128 driving steps are as self-evident as 2- and 4-digit addresses and up to 32 functions. With the help of RailComPlus technology, the de-coders register fully automatically at a suitable digital center.It masters all DCC programming modes and can be both driven and programmed with compatible digital centers: Thanks to RailCom, it is possible to read out the CV values on the main track with suitable control panels. Auxiliary registers exist for control panels that can only program the CVs from 1-255.Motorola users benefit from up to 28 driving steps at 255 addresses. Three additional Motorola addresses enable the triggering of 16 functions. A built-in programming mode also makes reprogramming possible with the venerable Control Unit 6021.The LokPilot 5 Fx micro DCC speaks "only" the DCC protocol, but can also be automatically registered with RailComPlus at appropriate control centers.The LokPilot 5 Fx micro decoder detects the Marklin brake distances as well as ZIMO HLU / ZACK commands or the Lenz ABC system. Braking with DCC brake blocks or with equal voltage is also possible. In addition, it also stops with a Selectrix brake diode. An automatic ABC pen train allows automatic commuting between two stations. Although this decoder does not have an engine output, this is also important for a function decoder in order to be able to synchronize control cars and motor cars.The LokPilot 5 Fx micro decoder can be used on analog DC and ac current webs; the LokPilot 5 Fx micro DCC on analog DC webs.The decoder switches "on-the-fly" fully automatically between operating modes. Most of the time, nothing needs to be adjusted.

Interaction
LokPilot 5 Fx micro are designed for interaction with the LokSound 5 and the LokPilot 5 decoders: for example, it is possible to equip the locomotive of a multiple unit with a LokSound 5 micro decoder and the control car with a LokPilot 5 Fx micro. Provided the same address, both are absolutely identical. The identical arrangement of the CVs facilitates the tuning of the two decoders.