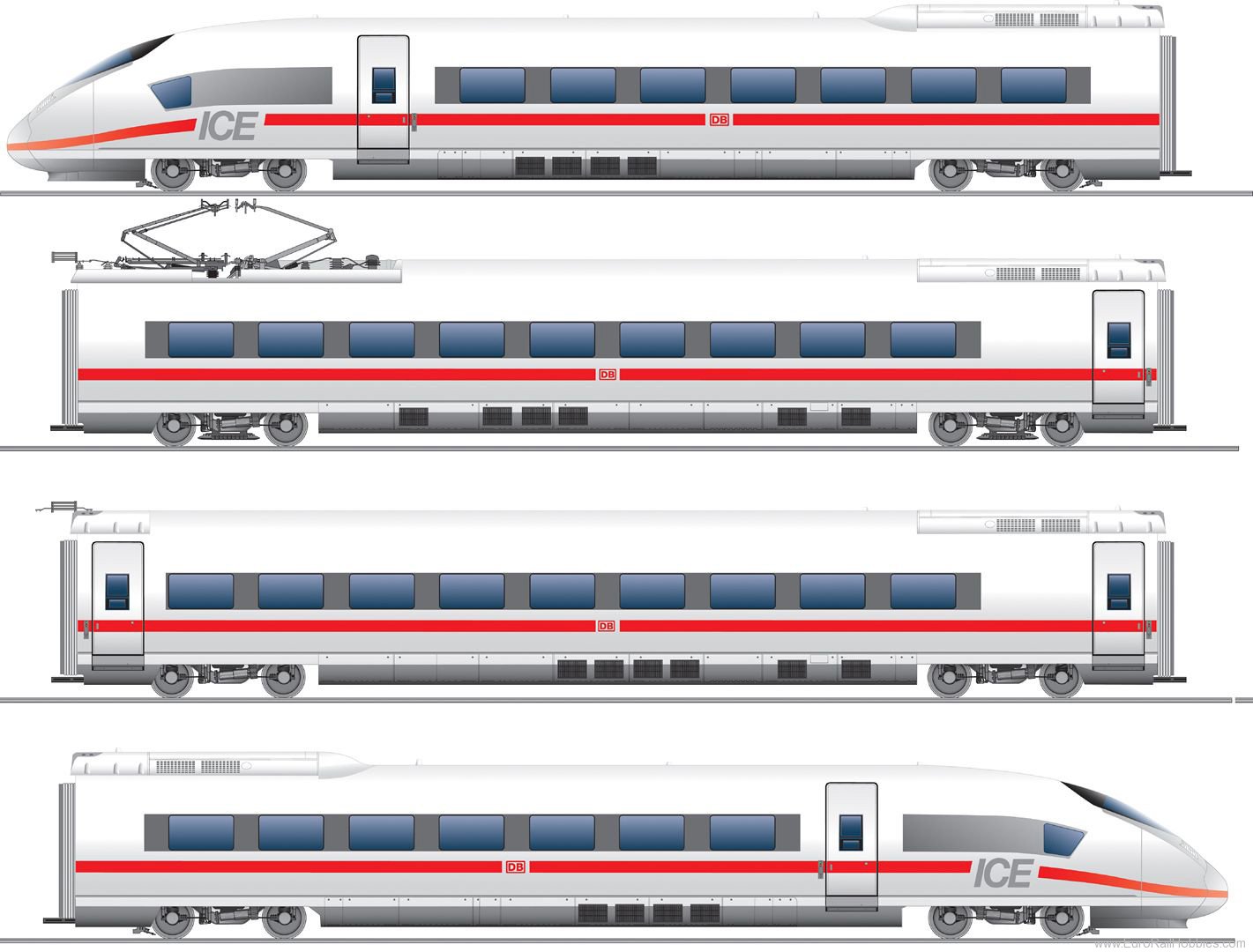 Model: Fleischmann's New Velaro ICE train will consists of two locomotive ends and two center coaches. Four additional coaches will be available. Model will have full interiors and extensive detail. Model will be equipped with a powerful can motor with flywheel and digital DCC interface. Interior lighting will also be available. Fleischmann new Velaro ICE train will truly be impressive.

Prototype: High-tech equipment, precision instruments, and miles of electrical wiring at the Siemens production facility in Krefeld, Germany, might fool you into thinking that whata™s being manufactured here is an airplane, or perhaps even a space shuttle. But the roughly 2000 employees are producing a high-speed train, the so-called Velaro D, which is to go into service in Germany at the end of 2011.

At a length of 200 meters, an eight-wagon Velaro trainset seats about 450 peoplea"comparable to some variants of the Boeing 747. The Velaroa™s top speed of 400 kilometers per hour doesna™t match that of a long-range plane. But for distances of up to 650 kilometers, and perhaps even as far as 900 kilometers high-speed trains can be a faster option than air travel, given that the latter involves trips to often remotely located airports, checking and retrieving luggage, cumbersome security measures, etc. Of course, ticket costs and other factors matter as well, but fast trains have drawn passengers away from air travel in a growing number of places, on routes including Tokyo-Osaka in Japan, or Madrid-Barcelona in Spain.

Another advantage of trains is their lower environmental impact. Siemens claims that the Velaro uses as little 0.33 liters of gasoline-equivalent per seat per 100 kilometers. (That translates into a stunning 713 miles per gallon per seat.) The Velaroa™s greenhouse gas emissions per passenger-kilometer would thus be 90 percent lower than those associated with typical air travel.

In growing numbers of countries, there is palpable excitement about high-speed trains, in line with an overall growth in rail investments. According to German consulting firm SCI Verkehr, worldwide operations and capital budgets for all types of rail (passenger and freight) amounted to a combined $590 billion in 2008. The annual market for rail-related goods and services worldwide runs to about $170 billion, up a fifth from 2006. It is expected to reach $214 billion by 2016.

More and more countries are jumping into the fray. Listed in order of their track-building ambitions between now and 2025, in addition to China and Spain they include France, Turkey, Japan, Germany, Poland, Portugal, Sweden, Italy, Morocco, Russia, Saudi Arabia, Brazil, India, Iran, and some others. The United States, too, is eager to join the high-speed league.

Variants of the Velaro are being sold to Spain, Russia, and China. But Siemens is facing intense competition from other manufacturers. Among them is Bombardier, a Canadian company with extensive European manufacturing activities. It has been involved in producing some of the most famous high-speed trains in the world, including the TGV in France, AVE in Spain, ICE in Germany, ETR in Italy, and CRH 1 in China. And along with Francea™s Alstom, it built Amtraka™s

Acela Expressa"the closest that the United States has to date come to fast intercity rail travel. Spaina™s Talgo and CAF are becoming growing competitors. Meanwhile, Kawasaki and other Japanese companies had long focused on their domestic market but are now increasingly pursuing export marketsa"already successfully in Taiwan, China, India, and the United Kingdom, and competing for contracts in Brazil, Vietnam, and the United States.

And now, Chinese companiesa"China Northern Locomotive and Rolling Stock (CNR) and China Southern Locomotive and Rolling Stock (CSR)a"are increasingly challenging the established producers. The leading foreign manufacturers were lured by the potentially vast market in China. But they could set up shop in China only under stiff local-content requirements and technology transfer agreements.

Without question, the high-speed rail race is heating upa"both in terms of building new lines and deciding who manufactures the trains. Ita™s a critical part of greening the economy.