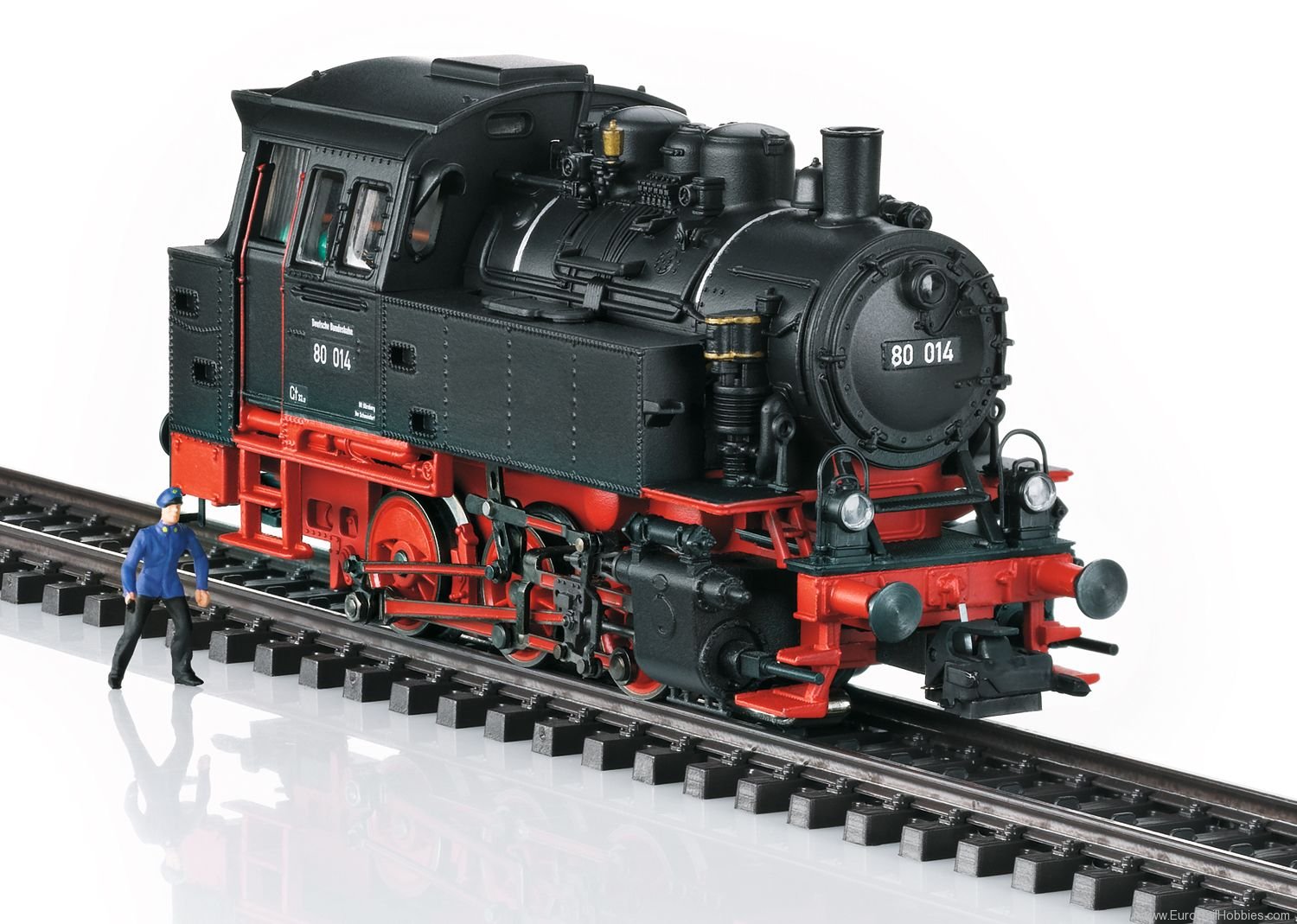 Model: The locomotive has an mfx+ digital decoder and extensive sound functions. It also has Telex couplers at both ends that can be controlled separately in digital operation. A locomotive engineer figure is included. The locomotive has controlled high-efficiency propulsion. 3 axles powered. Traction tires. The triple headlights change over with the direction of travel, will work in conventional operation, and can be controlled digitally. The locomotive has many separately applied details. This model is the version with a bell on the boiler, grab irons right and left on the smokebox door, a generator on the left side of the boiler, and steps on the water tanks. A booklet about the history of the locomotive is included. Length over the buffers 11.1 cm / 4-3/8".

3rd locomotive of a 5-part series of museum locomotives.

Road number 80 014 belongs to the powerful small switch engines of which 39 units were purchased by the DRG between 1927 and 1929 in its first standardization plan. These six-wheel locomotives with a high-performance boiler, soon known as "Bullis", were planned for switching service in large passenger yards. All of the locomotives survived World War II: 22 came to the DR (East Germany) and 17 remained with the DB. Starting in 1946, all later DB locomotives (80 005, 013-016, 028-039) were at the Nürnberg District. At the end of their career, the class 80 units were still in use only at Schweinfurt, and the last, road number 80 031, was retired there on April 15, 1964. Ten units were given a new chance as industrial locomotives at mines in North Rhine Westphalia and Lower Saxony. Among them was road number 80 014, which had been put into storage on April 20, 1959. The German Federal Railroad''''''''s central office in Minden sold the locomotive on July 8, 1959 to the firm Klöckner Mining Königsborn-Werne Inc. After an overhaul requested by Klöckner at the repair facility in Weiden, it was delivered to the mine railroad on December 2, 1959 after a test run and was given the following lettering: Klöckner-Werke AG Bergbau, Zeche Königsborn 2/5, Lok 5��/1228. With the establishment of Ruhr Coal, Inc. (RAG) in 1969 there was also successive uniform renumbering of the existing steam locomotives. Thus former road number 80 014 became "RAG D 721" on April 1, 1971. On January 1, 1972, road number D-721 had to be turned over to the mining pit Heinrich-Robert in Pelkum-Herringen. There it also proved itself until the arrival of four new Krauss-Maffei class M700C diesel locomotives in the spring of 1974. On May 1, 1974, road number D-721 was put into storage, although it could have continued to run until 1977 based on its maintenance due dates. On July 2, 1974, the locomotive was purchased by German Federal Railroad manager Ulrich Kroll from Essen and was initially placed in the DGEG Railroad Museum in Bochum-Dahlhausen. Since the DGEG had just acquired a class 80 from RAG, Kroll let the English railroad collector Dr. Peter Beet have road number 80 014 for his railroad museum Steamtown Carnforth in the county of Lancashire. It was shipped to England on December 6, 1976. In 1980, it was loaned to the Nene Valley Museum Railroad. There it was completely disassembled in 1985 at Peterborough for an overhaul but the unexpected death of the project manager thwarted this plan. Beet then attempted to have the individual components inspected at various specialist workshops in Europe. Finally, Dr. Beet, a member of the South German Railroad Museum in Heilbronn (SEH) since the year of its founding, decided to give road number 80 014 to the museum. After the first restoration work starting in 1998 in Stuttgart, the "Bulli" could actually be transferred at the start of 2002 to Heilbronn. Here over the course of the years, the renovation to museum standards of presentation was done, whereby most of the missing parts could be replaced by spare parts either from other standard design locomotives or with reproduction parts. In the meantime, road number 80 014 is almost once again like new in close to the condition of its last years on the German Federal Railroad.