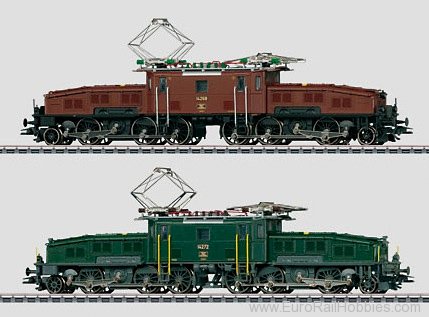 Model: Both locomotives have mfx digital decoders and extensive sound functions. 2 controlled, high-efficiency propulsion systems with flywheels per locomotive, 1 motor for each powered truck in each locomotive. 3 axles and jackshaft powered in each powered truck. Traction tires. The locomotive frames are articulated to enable the locomotives to negotiate sharp curves. The triple headlights and 1 white marker light (Swiss headlight / marker light code) change over with the direction of travel, will work in conventional operation, and can be controlled digitally. When the locomotive is running "light" the lighting can be changed to 1 red marker light. The lighting is maintenance-free warm white and red LEDs. The locomotives have highly detailed metal construction with many separately applied details. The locomotive body comes in 3 parts with hoods that swing out separately. The roof equipment is detailed with safety grills beneath the pantographs. Both locomotives come in individually marked packaging, with an additional master package. Length over the buffers for each locomotive 22.3 cm / 8-3/4".

"Crocodiles". The Swiss mountain locomotives that pulled heavy freight trains over the Gotthard grades are known as "Crocodiles". The design (hoods mounted for articulation, stretched out shape) and the color green gave them their name. These units "snaked" like a reptile through the curves when negotiating turnout combinations and S curves. "Six-axle standard gauge locomotive, only for large curves, faithful reproduction of the ''''''''Crocodile Locomotive'''''''' �" was the description in the Marklin catalog of 1933/34 for the reproduction of the latest locomotive from Switzerland. The design and the pulling power of the original locomotive impressed people so much at that time, that it became a synonym for progress and power. A legend that was part of Marklin''''''''s history from that point on. This legendary locomotive was offered in all of Marklin''''''''s scales. First in 1 Gauge and 0 Gauge, then in H0, and even in Mini-Club Z Gauge. It was the top product offered everywhere and thus became the unofficial "heraldic animal" of Marklin.