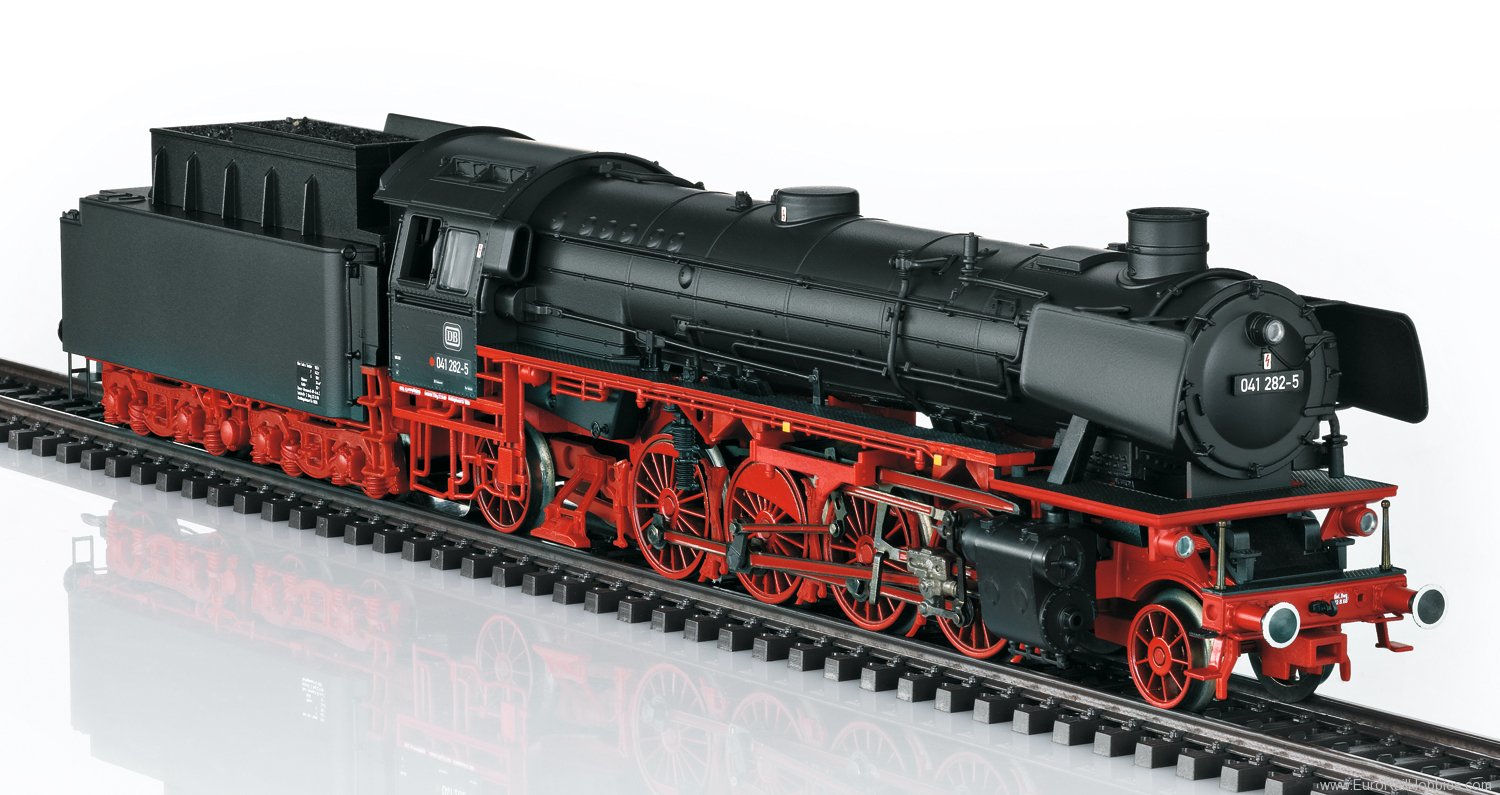 Powerful Pressure in the Boiler
The Berlin Machinery Company, Inc. Schwartzkopff delivered the first class 41 express freight locomotives in 1936. These units proved to be general-purpose locomotives for medium heavy trains. Between 1936 and 1941, 366 locomotives of this class were built, of which most were acquired after the war by the German Federal Railroad and the German State Railroad (East Germany).

Model: The locomotive has an mfx+ digital decoder and extensive sound functions. It also has controlled high-efficiency propulsion with a flywheel, mounted in the boiler. 4 axles powered. Traction tires. The locomotive and tender are constructed mostly of metal. A 7226 smoke unit can be installed in the locomotive. The triple headlights change over with the direction of travel. They and the smoke unit that can be installed in the locomotive will work in conventional operation and can be controlled digitally. Maintenance-free warm white LEDs are used for the lighting. There is a close coupling with a guide mechanism between the locomotive and tender that can be adjusted for the track curves. The rear of the tender and the front of the locomotive have close couplers with NEM pockets and guide mechanisms. The minimum radius for operation is 360 mm / 14-3/16". Protective piston sleeves, brake hoses, and imitation prototype couplers are included.
Length over the buffers 27.5 cm / 10-13/16".

This model can be found in a DC version in the Trix H0 assortment under item number 22841.

The Class 41 The locomotive building industry developed the class 41 2-8-2 locomotive for fast freight trains as part of the DRG's standardized locomotive program. Schwartzkopff delivered two sample units in 1936. The frame was a new development; the boiler was the same as on the class 03, but was designed on the class 41 for 20 atmospheres or 290 pounds pressure per square inch. The axle load could be set at 18 tons or 20 tons per axle. The resulting class 41 was for the first time a general-purpose locomotive that could be used anywhere. The two pre-production units were followed by 364 regular production locomotives that were improved somewhat and that were delivered by almost all of the German locomotive builders by 1941. These locomotives could run at 90 km/h or 56 mph and had 1,900 horsepower; they were used almost everywhere. After World War II, there were 216 locomotives on the DB's roster. It was soon found out that the type St47K boilers were worn out. Since the class 41 was indispensable, the DB developed a completely welded, high-performance boiler with a combustion chamber. Compared to the previous long tube boiler, this version had a higher ratio of premium radiant heating surface and could therefore support a greater load. Between 1957 and 1961, 102 class 41 locomotives were equipped with this new boiler at the maintenance facility in Braunschweig. Together with the front skirting being removed, this resulted in a considerably new look for the class 41 locomotives. 40 of these converted locomotives were also equipped for oil firing. The last grate-fired converted units were retired in 1971.