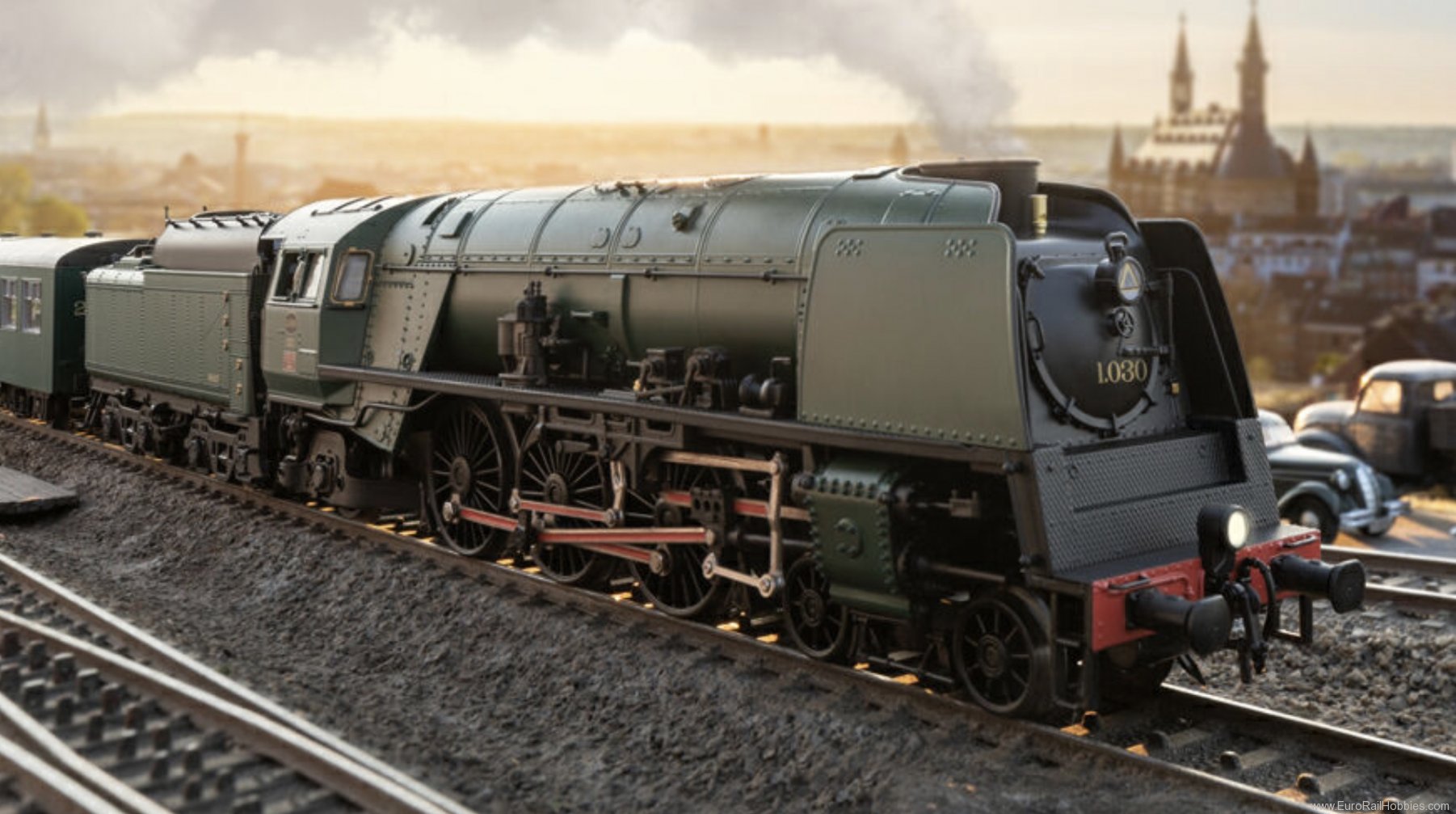 NOTE: The last of our Pre-Orders will only be sold with the 43546 Coach Set.

The Class 1 Express Steam Locomotive of the Belgian State Railroad

Together with the class 10 delivered by 1912, these units satisfied all requirements for train operations until well into the Thirties. Yet, the increasing competition from automobiles and planes as well as increasing train weights – chiefly on the line from Brussels to Luxembourg with its many grades – required an even more powerful locomotive. Thus in 1935 – to go with the 100th anniversary of Belgian railroads – the first class 1 locomotive was delivered.

It was delivered as a Pacific express locomotive with a 4-6-2 wheel arrangement. The driving wheel diameter was 1,980 mm / 78", the pilot truck wheel diameter 900 mm / 35-7/16" and the trailing truck wheel diameter 1,067 mm / 42". The external frame of the trailing truck was characteristic. It was necessary due to the large grate and reminded one of American locomotives. The running gear had 4 cylinders, but not in the version otherwise usual in Europe as compound running gear.

All four cylinders were provided with fresh steam. Naturally, this had the advantage of high rpm, good acceleration, and smooth running. This also meant no overly large low pressure cylinders had to be installed. However, this was achieved at the cost of greater steam and coal consumption so that a very large firebox was required, which was even equipped with two fire doors. In instances of great effort, even two firemen were occasionally employed. Based on experience in France, Kylchap forced draught equipment with two blast pipes – and thereby two smoke stacks – was installed.

The frame was built as a bar frame with cross supports of cast steel. The cylinder block was also constructed of cast steel – to be more precise of two cast halves bolted together. Externally the locomotives could be recognized immediately from the somewhat streamlined front with the smokebox door slanted at the upper edge and the large smoke deflectors. The effect of streamlined cab adapted to the boiler and the boiler cladding was very modern. Most of the piping was located under this cladding unlike on German locomotives where it was on the boiler.

The locomotive thus appeared very elegant and smooth, although in the proper meaning of the word it did not have streamlined cladding. The single headlight was typical for this locomotive. It was so to speak a "single lamp headlight". Later the locomotives were converted to double or even triple headlights. These locomotives were coupled to a large tender that rolled on two two-axle trucks. It carried 38 cubic meters / 10,038 gallons of water and 10.5 metric tons of coal – this was about the same as the capacity of the five-axle tender for the German class 05 or 45.

However, these locomotives – 126 metric tons without the tender – were very heavy. The axle load of up to 24 metric tons was also a record for that time. The units had a performance of 2,500 horsepower and a maximum speed of 120 km/h / 75 mph and could fulfill all of the requirements expected of them.

They exceeded the performance of their predecessor, the class 10, by up to 40% so that by 1938 35 units of this impressive locomotive had been delivered by several Belgian locomotive builders. They soon took over all important train service on the main route between Oostende, Brussels, and Liège as well as on the routes to Aachen and to Luxembourg with their many grades. Yet, World War II soon ended this and these locomotives were also used in lesser service.

At the beginning of the Fifties – when things went back to normal – the Belgian State Railroad began large-scale purchases of diesel locomotives, above all the class 202, the famous NOHAB units. After a short time, these new locomotives took over the most important express train service on non-electrified routes. The main route from Oostende to Liège was completely electrified starting in 1955. The class 1 was very quickly displaced to subordinate service and it was used with domestic passenger cars such as the typical M2 passenger cars instead of with the great express trains.

The end then came very quickly and by 1962, all of the locomotives in this class were retired. Only one survived – road number 1.002 was preserved and was even made operational again for the 150th anniversary of Belgian Railways in 1985. Currently it stands no longer operational at the railroad museum Chemins de Fer à Vapeur des trois Vallées in Treignes in the South of Belgium near the French border. We thus currently still have the possibility of looking at one of the quite extraordinary locomotives with its special technology – even if we can no longer experience it in operation.

Undoubtedly, the mighty class 1 Pacific locomotives formed the high point of Belgian steam locomotive building. Between 1935 and 1938, 35 units were built as road numbers 1.001-1.035. Their very successful external shape clearly characterized their mighty power. They were used mostly pulling heavy express trains on the route Oostende – Brussels – Liège – Aachen and on the route from Brussels via Arlon to Luxembourg City with an average speed of 80 or even 100 km/h / 50 or even 63 mph. With a performance of 3,400 horsepower, an axle load of 22 metric tons, and a maximum speed of 120 km/h / 75 mph, they occupied a position of honor in international comparisons.

Model: The locomotive has an mfx+ digital decoder and extensive light and sound functions. It also has controlled high-efficiency propulsion with a flywheel, mounted in the boiler. Three axles powered. Traction tires. The locomotive and tender are constructed mostly of metal. The locomotive has a factory-installed smoke generator. The headlights on the locomotive and tender change over with the direction of travel. They and the built-in smoke unit will work in conventional operation and can be controlled digitally. The emergency light on the smoke box door can be controlled separately in digital operation. There is also cab lighting and flickering firelight in the firebox that can be controlled separately in digital operation. Maintenance-free warm white and red LEDs are used for the lighting. There is an adjustable coupling with a guide mechanism between the locomotive and tender. The rear of the tender has a close coupler with a guide mechanism and an NEM coupler pocket. The minimum radius for operation is 437.5 mm / 17-1/4". Brake hoses, imitation prototype couplers, and signal holders are included. Length over the buffers approximately 28.4 cm / 11-3/16".

These will sell out fast. Reserve your''s today to avoid disappointment!