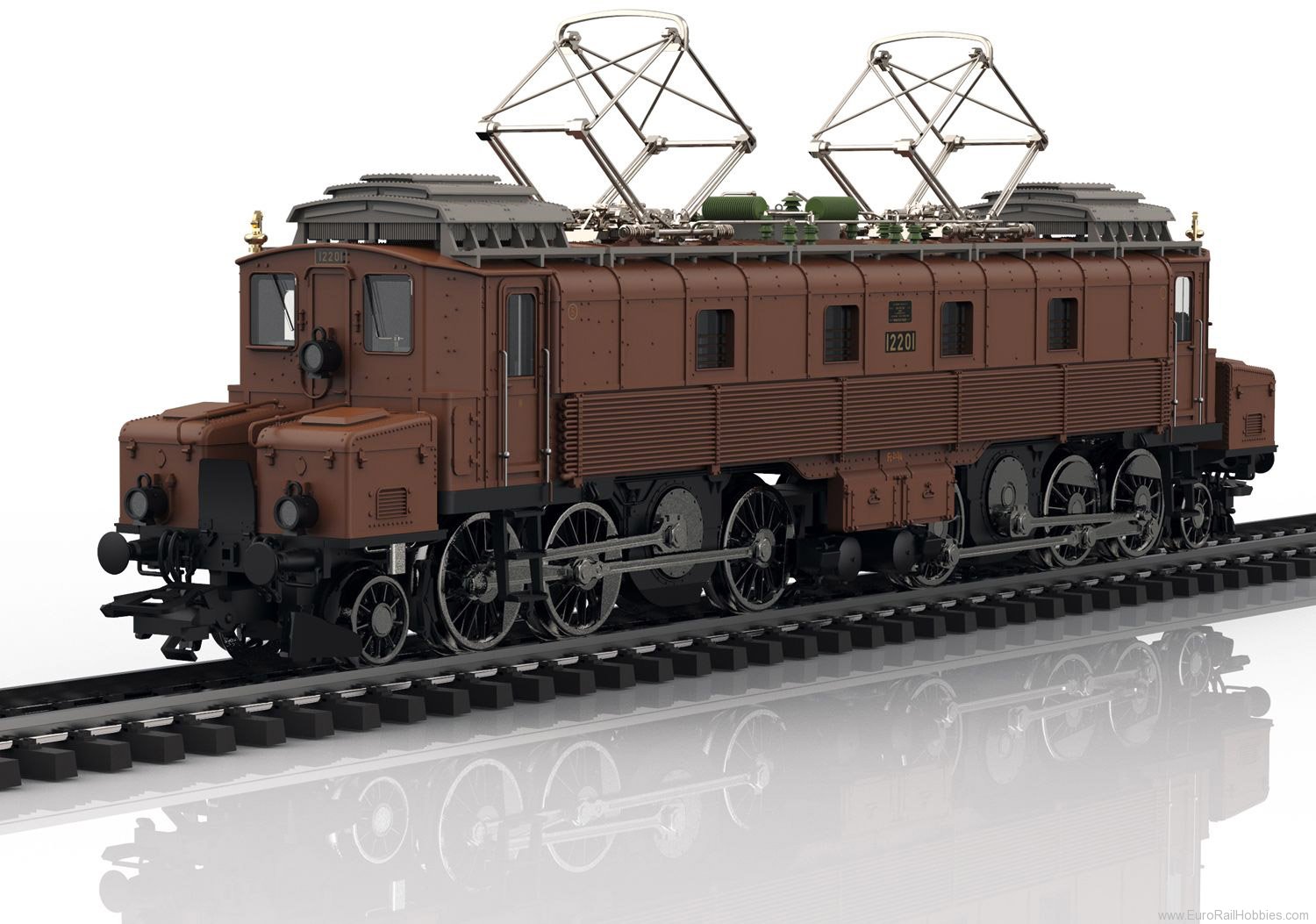 Prototype: Swiss Federal Railways (SBB) class Fc 2x3/4 "Köfferli" / "Little Suitcases" electric freight locomotive (later class Ce 6/8 I). Version when it was first delivered. Dark brown basic paint scheme with black running gear. With older design buffers, cab doors without windows at the ends of the locomotive, and with walkover plates, with sanding equipment, without an oncoming train light, and without an inductive magnet. Road number 12201. The locomotive looks as it did at the middle to the end of 1919.

Model: The locomotive has an mfx+ digital decoder and extensive sound and light functions. It also has controlled high-efficiency propulsion with a flywheel, centrally mounted. 3 axles and a jackshaft powered in each truck by cardan shafts. Traction tires. The locomotive frame is articulated to enable the locomotive to negotiate sharp curves. Triple headlights and 1 white marker light (Swiss headlight / marker light code) change over with the direction of travel, will work in conventional operation, and can be controlled digitally. When the locomotive is running "light" the lighting can be changed to 1 red marker light. The headlights at Locomotive Ends 2 and 1 can be turned off separately in digital operation. The locomotive has the double "A" light function. The cab lighting and engine room lighting can be turned off separately in digital operation. Maintenance-free warm white and red LEDs are used for the lighting. This locomotive is highly detailed metal construction with many separately applied details, such as cooling pipes for the transformer oil. The cabs and engine room are modelled. Sanding equipment is included on the groups of driving wheels. The roof equipment is detailed with heating resistors, roof conductors, insulators, and roof walk boards as well as double-arm pantographs with a simple contact strip. The minimum radius for operation is 360 mm / 14-3/16". Brake hoses, imitations of prototype couplers, and access ladders are included. Length over the buffers 22.1 cm / 8-11/16".

A freight car set to go with this locomotive can be found under item number 46520 in the Märklin H0 assortment.

This model can be found in a DC version in the Trix H0 assortment under item number 22968.

In 1919, the Swiss industry delivered four test locomotives for various uses to be selected as suitable units for electric operation on the Gotthard. At that time, a distinction was still made for electric locomotives among freight, express, and passenger units. Standardized locomotives in the present sense did not exist yet. The Swiss Locomotive and Machinery Company (SLM) provided the mechanical part on all four locomotives, while the Machinery Company of Oerlikon (MFO) was responsible for the electrical part on road numbers Be 4/6 11301 and Be 3/5 11201. BBC of Baden provided that part on road numbers Be 4/6 11302 and Fc 2x3/4 (later road number Ce 6/8I) 12201. Road number 12201 (later 14201) was a 2-6-6-2 freight locomotive taking specifically into account the route characteristics on the Gotthard. It could pull a maximum load of 860 metric tons on a grade of up to 1.2%. Its locomotive body rode on two three-axle power trucks, each of which was driven by two traction motors by means of jackshafts, driving rods, and side rods. Originally planned only as a six-axle unit, the electrical part turned out to be so heavy that two additional pilot wheel sets as well as small hoods became necessary. Due to these hoods, the unit was quickly given the nickname "Köfferli-Lok" / "Little Suitcases Locomotive", but "Schlotterbeck" or (approximately) "Shuttering Tank" also gained popularity due to its rough riding. On July 7, 1919, road number Fc 2x3/4 12201 was delivered as the fourth and last test locomotive and was initially tested from the Bern Depot. After a relatively long trial period, it went into regular scheduled use in December of 1919 between Bern and Spiez pulling passenger and freight trains. In March of 1921, it was moved to the Gotthard, where it ran along with the Ce 6/8II (Crocodile) in the latter's schedules from the Erstfeld Depot. Starting in 1925, it was based at the Biasca Depot and did mostly pulling work until 1930 to Airolo at the south portal of the Gotthard Tunnel. After another interval at the Erstfeld Depot, it went in 1938 to Basle having proved itself in heavy freight train service. With increasingly scarce use being made of it by 1967, it was pulled from normal service. As an historic one-of-a-kind, however it was in line for preservation and was assigned to the Bern Depot for brake testing. A brilliantly executed overhaul of the running gear in 1968 at the main shops in Yverdon suddenly gave this veteran better running characteristics than ever before. After a running performance of around 2,500,000 kilometers / 1,562,500 miles, this locomotive was finally retired at the end of May 1982 as the last Gotthard prototype.