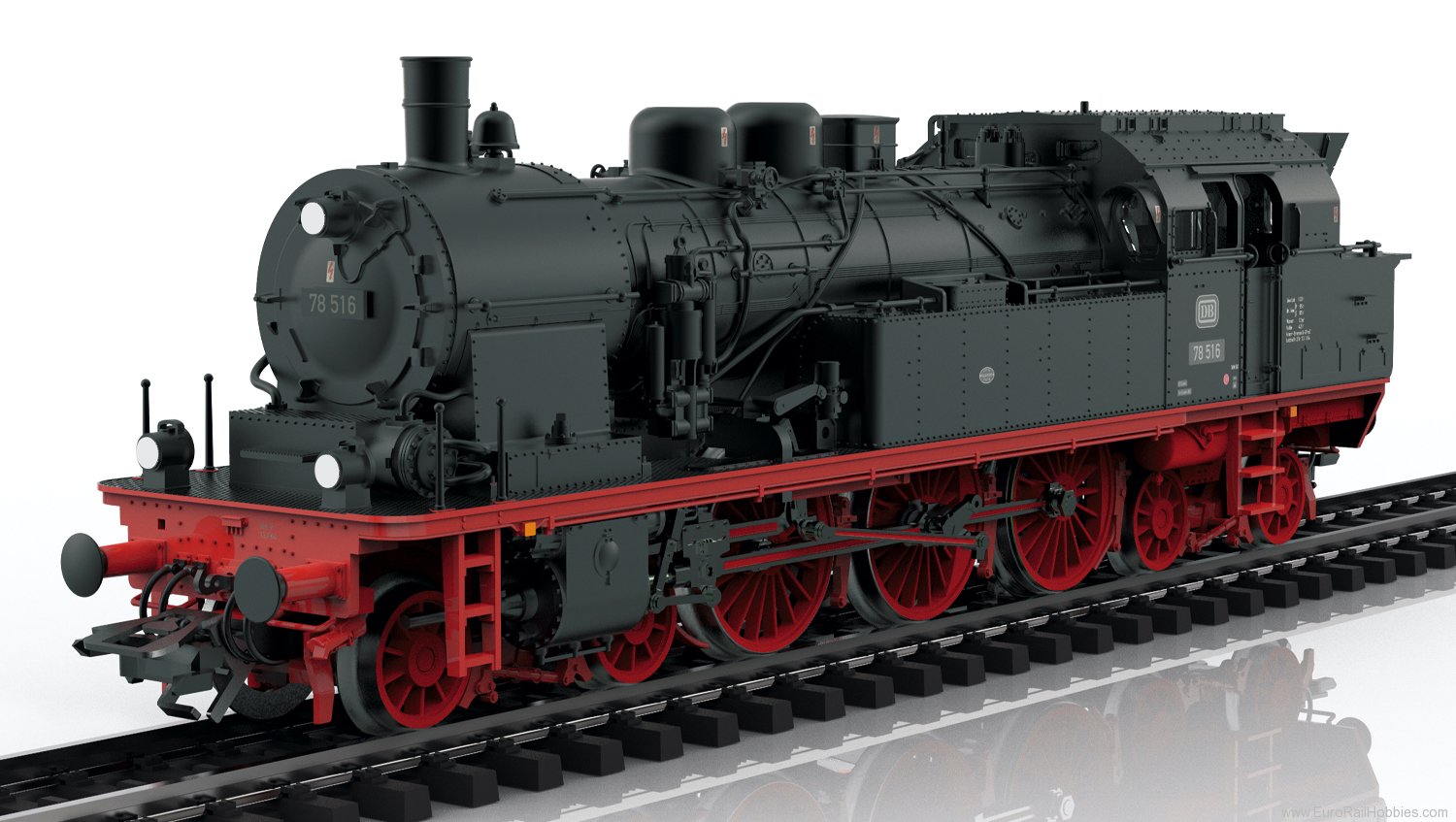 In Shuttle Service in the Sixties
Designed originally in 1911 for faster handling of passenger train service on the Isle of Rügen, the T 18 (later the class 78) resulted in one of the most successful German tank locomotives with its symmetrical design with three coupled wheel sets, two trucks, large fuel and water tanks, and a maximum speed of 100 km/h / 62.5 mph in both directions of travel. Executed as an impressive, highly detailed model of probably the most successful locomotive classes that ever ran on Germany's rails.

Model: The locomotive has an mfx digital decoder. It has controlled high-efficiency propulsion with a flywheel, mounted in the boiler. 3 axles powered. Traction tires. The locomotive is constructed mostly of metal. A 72270 smoke generator can be installed in the locomotive. The triple headlights change over with the direction of travel. They and the smoke generator contact will work in conventional operation and can be controlled digitally. Dual red marker lights can be controlled separately in digital operation. The cab lighting can also be controlled in digital operation. Maintenance-free warm white and red LEDs are used for the lighting. The locomotive has numerous separately applied grab irons and piping. The minimum radius for operation is 360 mm / 14-3/16". Protective piston rod sleeves and brake hoses are included.
Length over the buffers approximately 17 cm / 6-11/16".

This model can be found in a DC version in the Trix H0 assortment under item number 22876.

39786 - DB Tank Locomotive Road Number 78 516 Designed originally in 1911 for faster handling of passenger train service on the Isle of Rügen, the T 18 resulted in one of the most successful German tank locomotives with its symmetrical design with three coupled wheel sets, two trucks, large fuel and water tanks, and a maximum speed of 100 km/h / 62.5 mph in both directions of travel. It had two-cylinder hot steam running gear with externally mounted, horizontal cylinders positioned between the wheel sets of the pilot truck. Propulsion went to the second coupled wheel set and there was a two-axle truck front and rear, each with 40 mm / 1-9/16" of side play. The T 18 had a rugged frame. The annoying jerks still present on the prototype of 1912 at speeds of more than 60 km/h 37.5 mph were soon reduced by improved mass balancing. The T 18 was therefore authorized for 100 km/h / 62.5 mph despite its relatively small driving wheel diameter of 1,650 mm / 65". By 1927, the DRG rostered all total 460 Prussian (and clones) as well as 20 Württemberg T 18 units as road numbers 78 001-282 and 351-528. In 1935, the Saar units (78 283-328) were added. After nationalization of the Eutin-Lübeck Railroad (ELE) in 1941, the DRG acquired its T 18 units as 78 329 and 330. About 420 units survived in the Western Zones after the end of World War II. After retiring locomotives damaged in the war, the DB still rostered 377 operational units on July 1, 1950, including 32 units on the railroad in Saarland. By the mid-Sixties, the class 78 units were an everyday sight in many railroad districts. Road number 78 516 serving as the Märklin prototype was part of the next to the last delivery of the T 18. It was built in 1924 like almost all units at the Stettin Vulcan Works and had almost the last design of the former Prussian units with improved roof vents by virtue of a rectangular installation with adjustable hatches on the cab roof. It also had three domes (sand box, steam dome, and feed water dome) on the top of the boiler, older design buffers, continuous Knorr compressed air brakes, and De Limon lubrication pumps. Road number 78 516 took up service in the Essen District, which it kept all of its working life. Its assignments were Mülheim/Ruhr-Speldorf, Oberhausen Main Station, Dortmund (there equipped with shuttle train control), Duisburg Main Station, Essen Main Station, and finally Paderborn. From the end of 1958 to the start of 1965, the Essen District roster had always vacillated between 50 and 62 units, of which at least 20 were shuttle train locomotives. Starting in July of 1966, only Paderborn in the Essen District still hosted operational T 18 units, including road number 78 516. Yet it was also evident there that these locomotives could no longer be used rationally. Road number 78 516 was soon put in storage on March 1, 1967 and retired shortly thereafter on May 22, 1967.