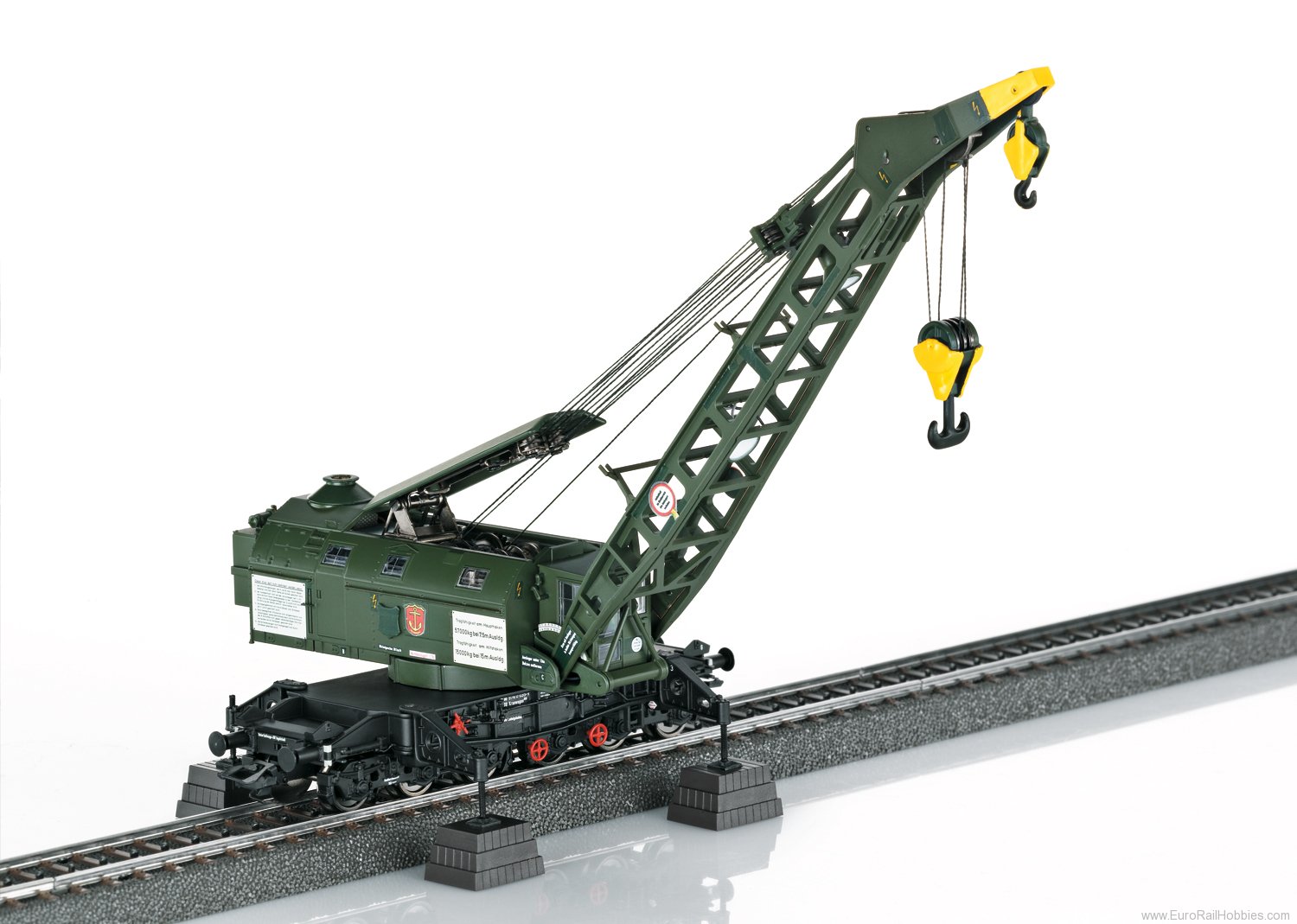 Rescue, Salvage, Load
The steam cranes of the firm Ardelt with a lifting capacity of 57 metric tons were undoubtedly one of the most indispensable helps on the rails in the rebuilding years in the new German Federal Republic. Regardless of whether they were used with their impressive power in recovery work, lifting work, or loading work, they always caught the attention of railroad fans. These perfectly adapted cranes guaranteed precise work despite their mass. Now you can use one of these great helpers on your model railroad layout. Thanks to the outstanding combination of extensive electronic features and mechanical refinements, this rotary crane will captivate you with its abundance of detailing and will win you over even in difficult to access or tricky areas of your model railroad layout.

Prototype: German Federal Railroad (DB) type 058 6-axle railroad rotary crane car (Ardelt) with a lifting capacity of 57 metric tons, with a crane tender car (converted from a type Rms Stuttgart car) and a type 631 tool car. Chrome oxide green paint scheme for the steam crane. With the coat-of-arms for the city of Ludwigshafen am Rhein. The cars look as they did around 1977.

Model: The crane car has an mfx+ digital decoder and sound functions. The crane superstructure with its boom can be rotated 360° on the ring gear. The boom can be raised and lowered by means of a pulley. The main hook made of metal can be raised and lowered by means of a pulley. The crane cab lighting can be controlled digitally. Two floodlights on the boom can be controlled digitally. LEDs are used for the lighting. The crane car has a built-in smoke unit that can be controlled digitally. 4 support arms can be swung out manually and they can be positioned with spindles on the bases included with the crane car. The smoke stack with a smoke hood can be removed or installed. A counterweight made of metal can be partially removed and placed on the buffer attachment. The crane car has a 6-axle car frame and a crane housing constructed of metal. There is a stake car (converted from a type Rms Stuttgart car) with a guide block as a crane tender car. A former Interchange Design type Gl "Dresden" boxcar functions as a type 631 tool car. The minimum radius for operation is 437.5 mm / 17-1/4"! Total length over the buffers approximately 40 cm / 15-3/4"