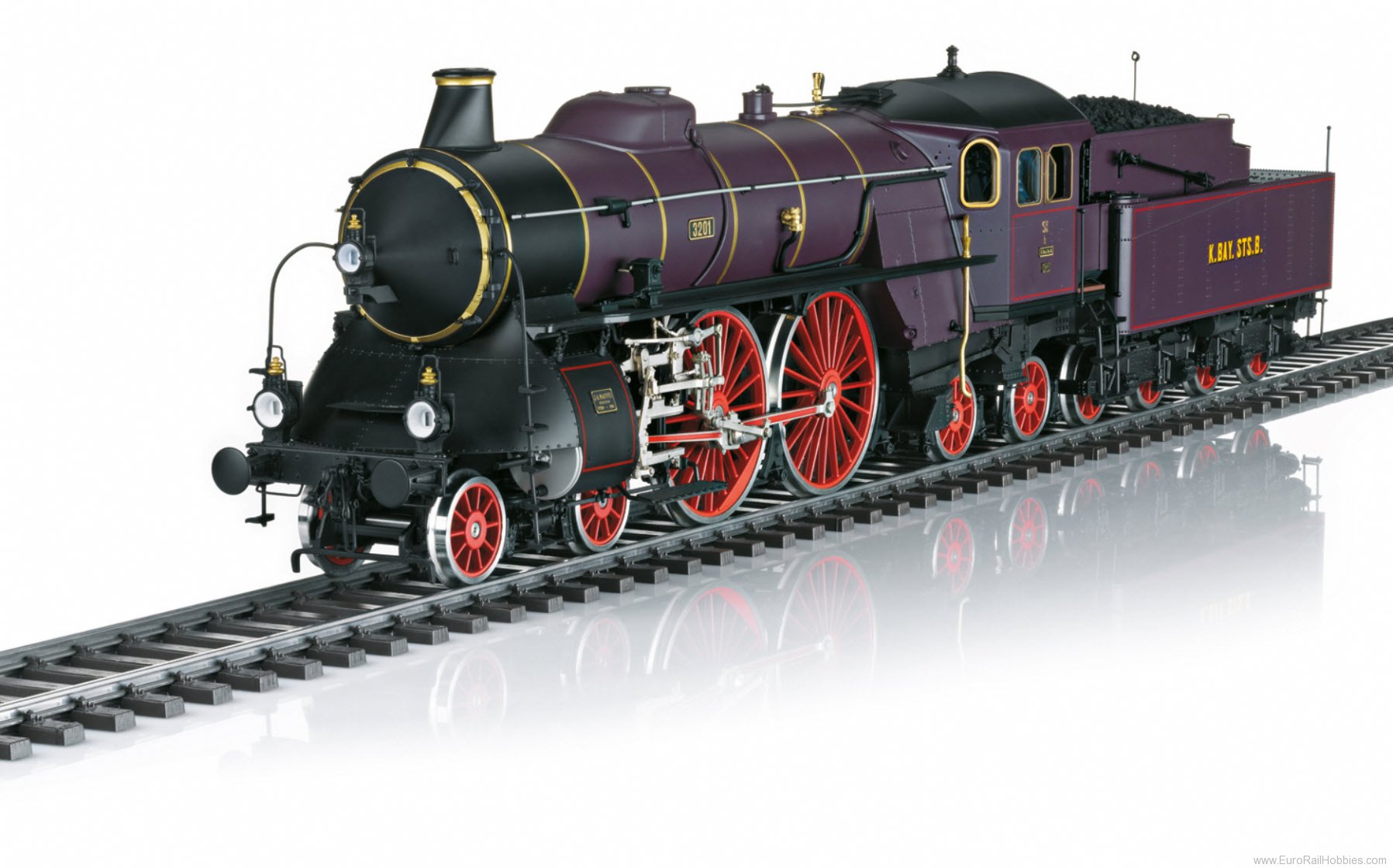 Prototype: Royal Bavarian State Railroad (K.Bay.Sts.B.) class S 2/6 (Bavarian designation) express steam locomotive in the brownish violet basic paint scheme, with golden boiler rings, for use in the Left Rhine (Palatinate) network. The locomotive looks as it did around 1910 to 1912. Locomotive road number 3201.

The locomotive is completely new tooling and is constructed of metal. It has a frame, superstructure with boiler, and cab constructed of die-cast zinc. Other separately applied parts are mostly constructed of brass. This is a highly detailed model with many separately applied parts and a highly detailed engineer's cab. The smoke box door can be opened. The cab doors and much more can be opened. The locomotive has an mfx digital decoder with 32 functions, controlled high efficiency propulsion, and a sound generator with operating sounds synchronized with the wheels as well as extensive sound functions. It can be operated with AC power, DC power, Märklin Digital, and DCC. The locomotive has a built-in buffer capacitor. All driving axles powered. The locomotive has a built-in smoke unit with smoke exhaust and multi-step cylinder steam synchronized with the wheels and a steam whistle. The locomotive has running gear lights and triple headlights with a light color correct for the era and that change over with the direction of travel. The headlights will work in conventional operation and can be controlled digitally. Maintenance-free, warm white LEDs are used for the lighting.
The locomotive has a red marker light that can be controlled and cab lighting. It also has controlled multi-colored firebox lighting (flickering), a servomotor-controlled firebox hatch, and a turning fireman figure for prototypical modelling of the firing of the firebox. There is also servomotor-controlled lowering of the imitation coal in the tender. The locomotive comes with sprung buffers. There is a reproduction of the prototype coupler on the front and a remote-controlled Telex coupler on the rear of the tender (the latter of which can be replaced by a prototype coupler). The valve gear switchover is in 3 steps (forward, reverse, continuous operation). There is a built-in figure of a locomotive engineer.
An accessory package with a reproduction of the prototype coupler, smoke fluid, and gloves are included with the locomotive. The locomotive is mounted on an aluminum base painted black for display purposes. Minimum radius for operation 1,020 mm / 40-3/16". Length over the buffers approximately 66.2 cm / 26-1/16". Weight approximately 6.8 kilograms / 15 pounds.