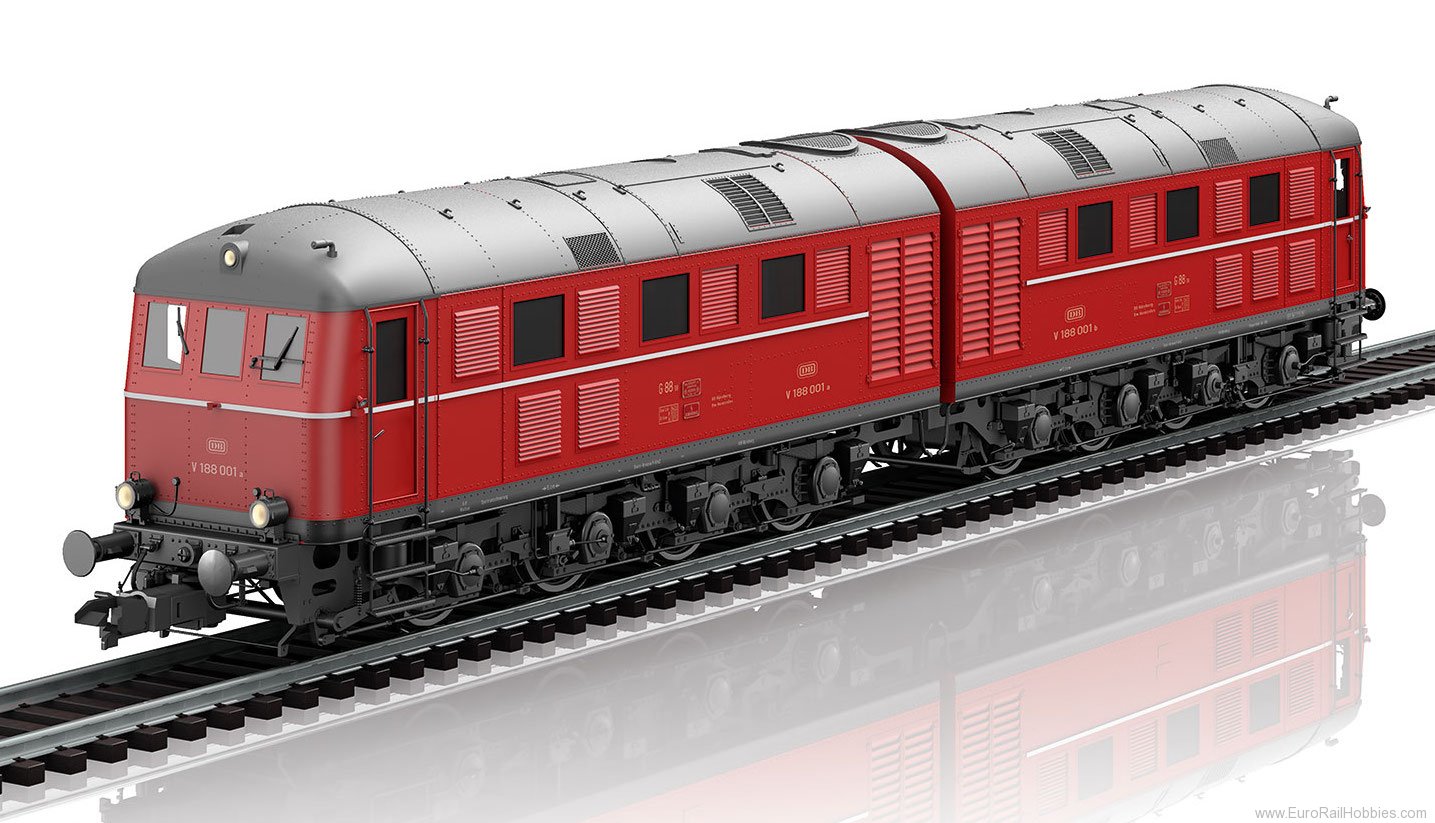 Model: The locomotive is completely new tooling. The frame and body are constructed of metal. The locomotive has many separately applied brass and metal parts such as grab irons, metal signs, windshield wipers, etc. It also has a DCC digital decoder and extensive sound functions such as running sounds, locomotive whistle, and much more. The locomotive can be operated with AC, DC, Marklin Digital, and mfx. Each locomotive half has a powerful motor with all driving axles powered. The white headlights with LEDs change over with the direction of travel, will work in conventional operation, and can be controlled digitally. There is white LED lighting in the cabs that changes over with the direction of travel. Vents in both locomotive halves are electrically powered. There is exhaust smoke from both stacks and it can be controlled electrically. The engine room lighting can be controlled. The engine room details and cab details are modelled. The cab doors can be opened and Cab 1 has a figure of a locomotive engineer. The buffer beams have sprung buffers and separately applied brake lines. The locomotive has factory-installed, electric working Telex couplers at the end of each locomotive half. The Telex couplers can be replaced by 2 reproduction prototype couplers included with the model. The two locomotive halves are connected by a separable drawbar with a guide mechanism. Minimum radius for operation 1,020 mm / 40-3/16". Length over the buffers 70.3 cm / 27-11/16".

The class V 188 double locomotives (from 1968 on: class 288) enriched the motive power roster of the German Federal Railroad until 1972 as exotic diesel electric units with a remarkable past. Three of these double locomotives survived the war, and two of them were overhauled at Krauss-Maffei between 1948 and 1951. The DB assigned them the road numbers V 188 001a/b (former D 311.03A/B), V 188 002a/b (former D 133.04A/B), and V 188 003a/b (former D 311.02A/B). The last unit mentioned was not overhauled but was kept a long time for spare parts. The two overhauled locomotives were initially assigned to the Aschaffenburg District and were used there for pusher service on the Spessart grade between Laufach and Heigenbrucken. Starting in 1953, they were used somewhat less successfully to haul freight trains to Schweinfurt, Bamberg, and Dillenburg. The old MAN motors increasingly caused problems. The two locomotives were therefore equipped with new 1,000 horsepower (later 1,100 horsepower) Maybach motors by 1957/58 as well as new transmissions from Gmeinder. After that, they worked very well and they were used by the end of 1958 in the Aschaffenburg District, then in the Gemunden District, and from 1967/68 on in the Bamberg District in heavy freight service. After sustaining larger amounts of damage the two war veterans had to be retired on September 25, 1969 (288 001) and on June 15, 1972 (288 002) as part of the general program to rationalize the motive power. A little while later, they were scrapped.