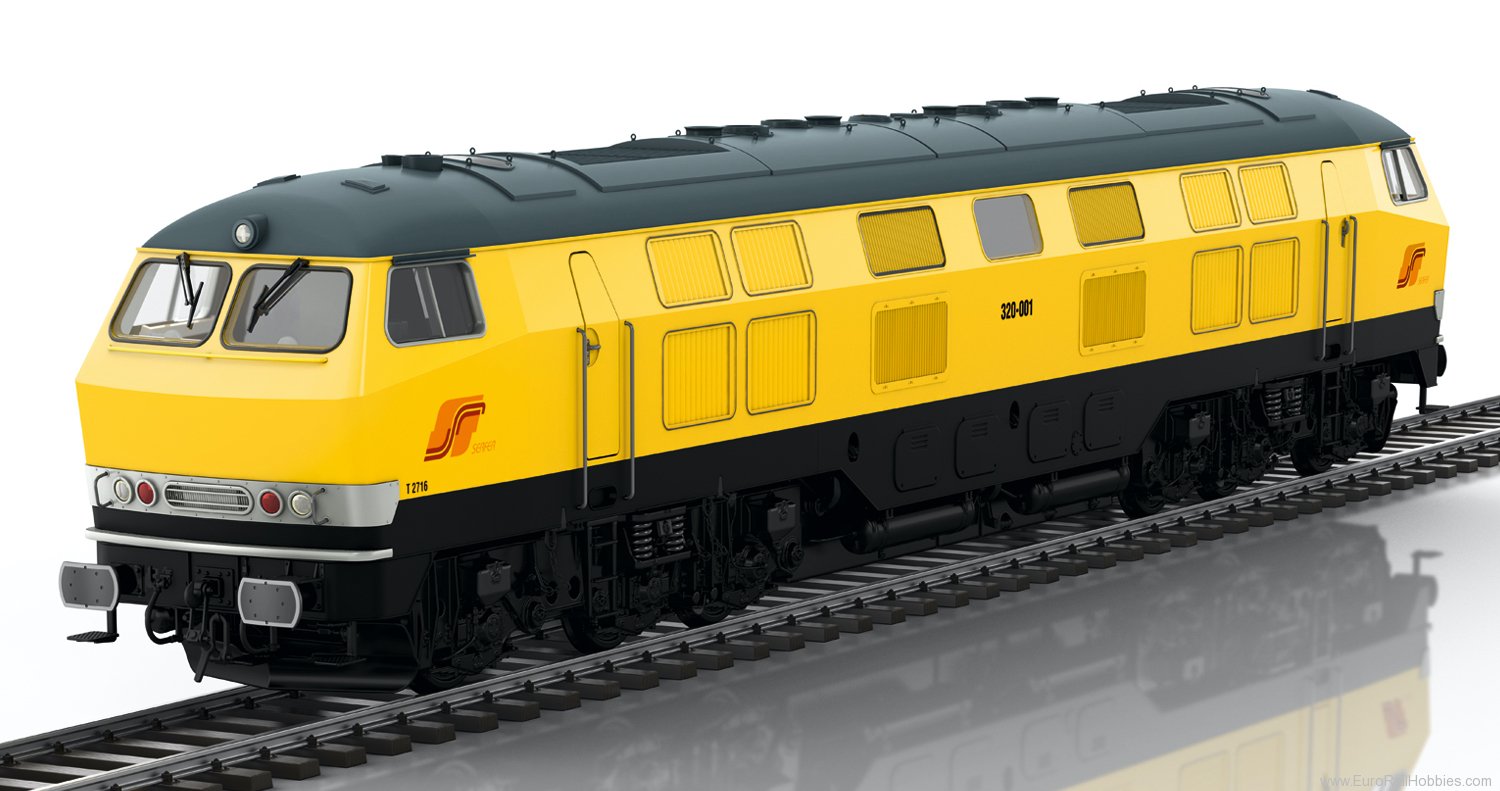 A Colossus for the Italians
After its deadline in 1992, the V 320 disappeared to Italy to earn its daily living in construction train service. Starting in 1995, it was available to the track construction firm Servizi Ferroviari SrL (SerFer) as road number T2716 (320-001) to haul freight trains as well as in construction service. Yet due to its "over dimensioned size", it was used rather sporadically so that SerFer was already looking for a buyer in 1998 for this large diesel locomotive and found it in the German track building firm WIEBE.

Prototype: Servizi Ferroviari SrL (SerFer) diesel locomotive, road number 320-001 (former road number V 320 001 and Henschel DH 4000) as it looked in Era V around 1995. With metering boxes on the trucks to the right rear and left rear, with wind deflectors on the cab windows, and with rain gutters above the cab windows.

Model: This locomotive is completely new tooling. The running gear with the main frame and locomotive body are constructed of metal. The locomotive has many separately applied brass parts and separately applied metal parts such as grab irons, metal signs, windshield wipers, etc. The locomotive has a DCC-Digital decoder, extensive sound functions as well as running sounds that vary with the speed, a locomotive whistle, warning horn, compressed air being released, vent sounds, and much more. The locomotive can be operated with AC, DC, Märklin Digital, and MFX. The locomotive has a built-in buffer capacitor, whose parameters can be adjusted. It also has two high-efficiency motors with drive to all axles and a high level of pulling power. The LED white headlights / red marker lights change over with the direction of travel, will work in conventional operation, and can be controlled digitally. There is white LED lighting in the cab that changes over with the direction of travel and that can be turned off. All of the vents include sound. They are prototypically driven and can be turned off. There is smoke exhaust from all of the exhaust stacks and it can be controlled electrically. The engine room lighting / corridor lighting can be controlled. The engine room and cab interior details are modelled. The cab doors can be opened, and Cab 1 has a figure of an engineer. The buffer beams have sprung buffers and separately applied brake lines. There is a factory-installed, electrically working Telex coupler at the back of the locomotive. The front has a prototype coupler. Each factory-installed type of coupler can be replaced by the other type, which is included with the locomotive. Individual round buffers included. Gloves are included with the locomotive.
Minimum radius for operation 1,020 / 40-3/16".
Length over the buffers 71.9 cm / 28-5/16".
Weight approximately 7 kilograms / 15 pounds.

As early as 1956, the firm Henschel began at its own cost design and construction in cooperation with the DB's central office in Munich of what is still the largest and most powerful diesel hydraulic locomotive in Europe. Henschel was able to reach back to valuable experience with export locomotives in the development of this giant. Apart from that, with road number V 320 001 use was made of the proven technique to install two 1,900 horsepower motors in this big unit from the newly built V 160. However, the three-axle trucks were completely new. In view of the maximum speed of 160 km/h / 100 mph, the wheelsets were given the unusually large diameter of 1,100 mm / 43-5/16". A switching device activated, when the locomotive was stopped, allowed the assignment of the combination of high speed (160 km/h / 100 mph) with lower pulling power (express trains) or low speed (100 km/h / 63 mph) with higher pulling power (freight trains). The modern, angular design of its ends pointed the way for all future DB diesel locomotives. The proud 23 meter / 75 foot 5-1/2 inch length, the fat fuel tanks on the underside of the frame, and an impressive number of adjustable ventilation grills gave it a reptilian elegance behind which the two motor layouts hummed. With its 122 metric tons of iron and steel distributed over six wheelsets, it could definitely be described as a monster - but a really beautiful monster! Due to high capacity utilization at Henschel, road number V 320 001 could not be delivered until 1962. Initially, extended measurement and test runs were done with the unit. Starting in 1963, it went into the DB roster as a lease locomotive and it was initially based at Hamm. In 1965, the class V 320 moved to Kempten and chiefly hauled heavy express trains between Munich and Lindau. There it quickly demonstrated how extremely suitable it was for heavy international express trains and the shop crews were full of praise for its performance reserves. The D 96 "Rhône-Isar" (Munich - Lindau - Zürich - Geneva) with a consist of usually eight cars formed one of its star trains. The DB as well as the SBB ran their latest rolling stock in it. The DB provided three types of the 26.4 meter / 86 foot 7-5/16" cars first bought in 1961/63, namely a type AB4üm-63 (compartment car, 1st/2nd class), two or three type B4üm-63 (compartment car, 2nd class), and a type BRbu4üm-61 half dining car (2nd class). The SBB reciprocated with its type EW 1 standard design cars (EW 1) in lightweight steel construction with two type B cars (2nd class), a type A car (1st class), and a type D baggage car. In 1974, the DB ended the lease agreement with the class V 320 (starting in 1968: class 232) and gave it back to the builder. Henschel ran the unit through a major overhaul and sold it in April of 1976 to the Hersfeld County Railroad, where it was used until 1988. After that, the locomotive came to the Teutoburg Forest Railroad (TWE). After its deadline for maintenance came in 1992, it disappeared to Italy to earn its living in construction train service. This appeared to seal the fate of this highly interesting unit, but in 1999 came its spectacular importation back to Germany by the track construction firm WIEBE. After an extensive overhaul and the installation of new motors, it had been running since March of 2000 on German rails again, now designated as road number 320 001-1 (WIEBE 7), until wheelset bearing damage in 2015 ended its use forever. Since 2017, it has enriched the builder's plant in Kassel (now Bombardier) as a showpiece.