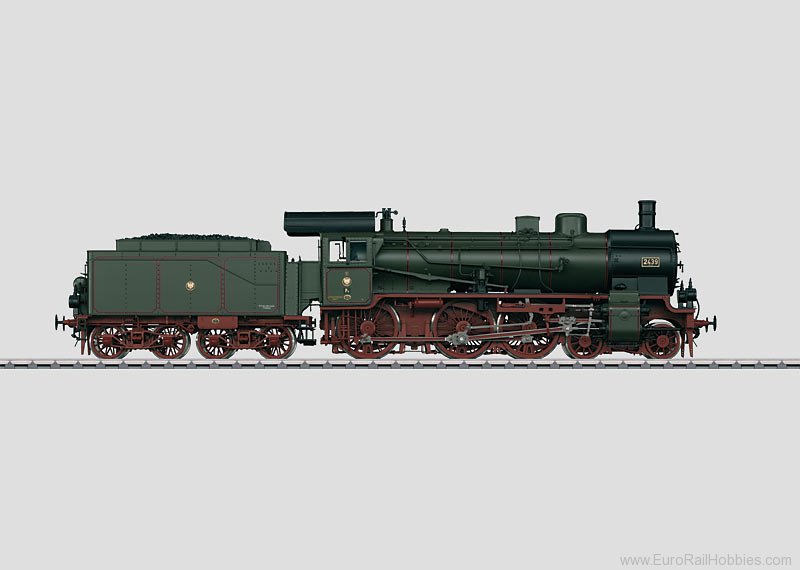 Model: The locomotive has a frame, superstructure, tender, and applied parts constructed mostly of metal. This is a highly detailed model with many separately applied parts and a detailed engineer''''''''s cab. The locomotive has an mfx digital decoder, controlled high efficiency propulsion, and a sound generator with operating sounds synchronized with the wheels as well as extensive sound functions. It can be operated with AC power, DC power, Marklin Digital, or DCC. 3 axles powered. The locomotive has a built-in smoke unit with smoke exhaust and cylinder steam synchronized with the wheels. The dual headlights have a light color correct for the era and change over with the direction of travel. The headlights and the smoke generator will work in conventional operation and can be controlled digitally. The lighting is maintenance-free, warm white LEDs. The locomotive has running gear, engine cab, and fire box lights. The locomotive has a reproduction of the prototype coupler on the front and a claw coupler on the rear of the tender. An accessory package with a reproduction of the prototype coupler, a claw coupler, and a figure of a locomotive engineer and a fireman is included with the locomotive. Minimum radius for operation 1,020 mm / 40-3/16". Length over the buffers 58.1 cm / 22-7/8".