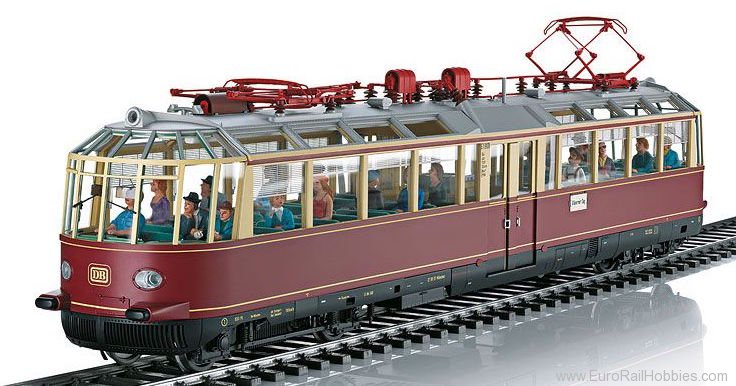 Model: The frame is constructed of metal, the body of finely constructed metal/plastic with many separately applied details (metal grab irons, windshield wipers, air whistle, etc.). The trucks have prototypically different wheelbases. The car has an mfx digital decoder, controlled high-efficiency propulsion, and extensive sound functions. It can be operated with AC power, DC power, Marklin Digital, and DCC. LEDs are used for the white headlights and red marker lights. They will work in conventional operation and can be controlled digitally. The car has factory-installed interior lighting. The interior lighting can be dimmed as a digital auxiliary function. The car has a detailed interior. A set of 20 figures and 2 adhesive "Sonderfahrt" ("Special Run") signs are included. There are two double-arm pantographs on the roof. In digital operation, the pantographs can be raised and lowered by motors. The minimum radius for operation is 1,020 mm / 40-1/8". Length over the buffers 64.4 cm / 25-3/8".

At the start of the Thirties, the German State Railroad was feeling increasing competition from cars and busses. Therefore, there were different attempts to improve the service to customers and to make traveling more attractive. Two electric powered observation cars were ordered from the car builder Fuchs and from AEG (electrical equipment) in order to give a stimulus to excursion traffic. These cars were intended later as exhibition units for the DRG and were known as the "Glass Trains". These cars had to satisfy special requirements for excursion traffic in the scenically very attractive Bavarian and Austrian Alps: Passengers had to be able to observe the scenery unhindered in all directions from their seats. This required the smallest possible use of opaque building materials in the window and roof area. In addition, as many parts as possible were supposed to be taken from the standard design ET 25 and ET 31 powered rail cars to keep costs down. The builders were able to fulfill these conditions: Large windows on the ends and in the diagonal parts of the roof gave a good view all around. The car bodies were constructed completely of shaped parts and sheet metal welded together and had only a single center entry on both sides of cars. The restroom was located almost at the level of the lower edge of the windows in the area of the center entry in order to have a free view from the seating area. The backs on the passenger seats could be folded over. Two traction motors suspended from the axles powered both wheel sets in the powered truck; the second truck was not powered. The usual electrical equipment was arranged under the car floor according to standard design principles. The elT 1998 powered rail car (later road number ET 91 01) was still not completely finished in the electrical area but was presented at the Nurnberg exhibition "100 Years of German Railroading" from July 14 to October 13, 1935. The second powered rail car, elT 1999 (later road number ET 91 02) was delivered in September of 1935 and took part in the great vehicle parade for the 100th anniversary. Both powered rail cars then ran in special service from Munich on the electrified routes of Southern Germany and soon thereafter to Austria. Favorite trips offered then and after World War II were the "Karwendel Excursion" or the "Great Alps Excursion". A bomb attack on Munich during the night of March 9/10, 1943 ended the short career of road number ET 91 02. It burned up completely as a result. It's sibling had been moved to Bichl and was walled in at the locomotive shed there; it survived the war undamaged and soon made itself useful again in excursion service; it was designated starting in 1968 as road number 491 001-4 in accordance with UIC rules. Its career came to an abrupt end on December 12, 1995 when it collided with a passenger train at the Garmisch-Partenkirchen station. Since then the heavily damaged "Glass Train" stands in the Augsburg yards and waits for better times.