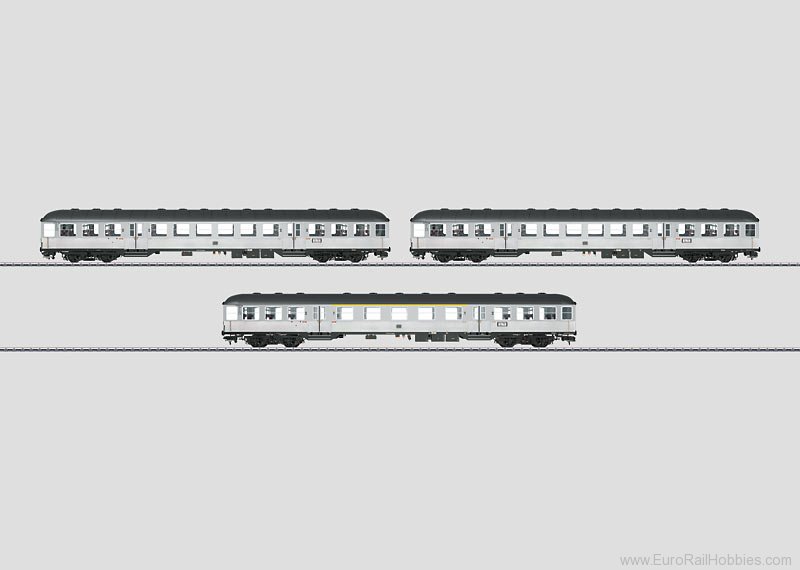 Model: The car bodies are finely constructed of plastic with complete detailed interiors and many separately applied details. The cars reproduce the original, typical "peacock's eye" pattern. The cars have detailed underbodies specific to the car types. The trucks are Minden-Deutz designs with brake shoes and separately applied generators. Each car has built-in interior lighting and marker lights that can be controlled digitally with the factory-installed digital decoder. The interior lighting will work in conventional operation. Maintenance-free, warm white LEDs are used for the interior lighting. The couplers have close coupler mechanisms. All of the cars have a scale length at 82.5 cm / 32-1/2". The minimum radius for operation is 1,020 mm / 40-1/8" (1,550 mm / 61" for operation with parallel curves). Total length over the buffers 248 cm / 97-5/8".

The "Silberlinge / Silver Coins" - A DB Success Story. The German Federal Railroad car designated as "Silberling / Silver Coin" is a car adhering to the UIC-X guidelines. It is 26.4 meters / 86 feet 7-3/8 inches long and has 2 entry areas with double doors. The name derives from the car bodies constructed of polished stainless steel. The car group "n", the official designation for the "Silberling", was purchased in a group of 5,000 units between 1961 and 1980 and in different designs. For a long time it was the most widely used car in commuter service on the DB. Depending on the design, these cars tip the scales at 31-40 metric tons and are authorized for a maximum speed of 120-140 km/h / 75-88 mph. The pure 2nd class car has seating for 96, in the mixed class car there is seating for 30 in 1st class and for 46 in 2nd class. The German Federal Railroad placed different cab control cars into service for push/pull operation, which was often done with the class E 41/141. The "Rabbit Hutch", a cab control car with extremely cramped space for the locomotive engineer was replaced by the later "Karlsruher Kopf" type cab control car. This cab control car also had a baggage area, but more importantly a modern, generously arranged engineer's cab. The name derives from the maintenance facility in Karlsruhe, where the cab control cars were rebuilt. The "Silberling" was a universal car, from commuter service to express train, even used as reserve cars in Inter-Zone trains to Berlin. The "n" cars had steam, diesel, and electric locomotives for motive power, and, like many other DB cars, were run in different paint schemes. However, although they have been ignored in mint green, "traffic red", or countless forms of Graffiti, they have remained the "Silberlinge" in popular usage. Presently, these cars are in used on the DB AG in the "traffic red" paint scheme, and similar classes based on the construction principles for the "Silberlinge" can be found in Luxembourg, the Netherlands, and Poland, for example.