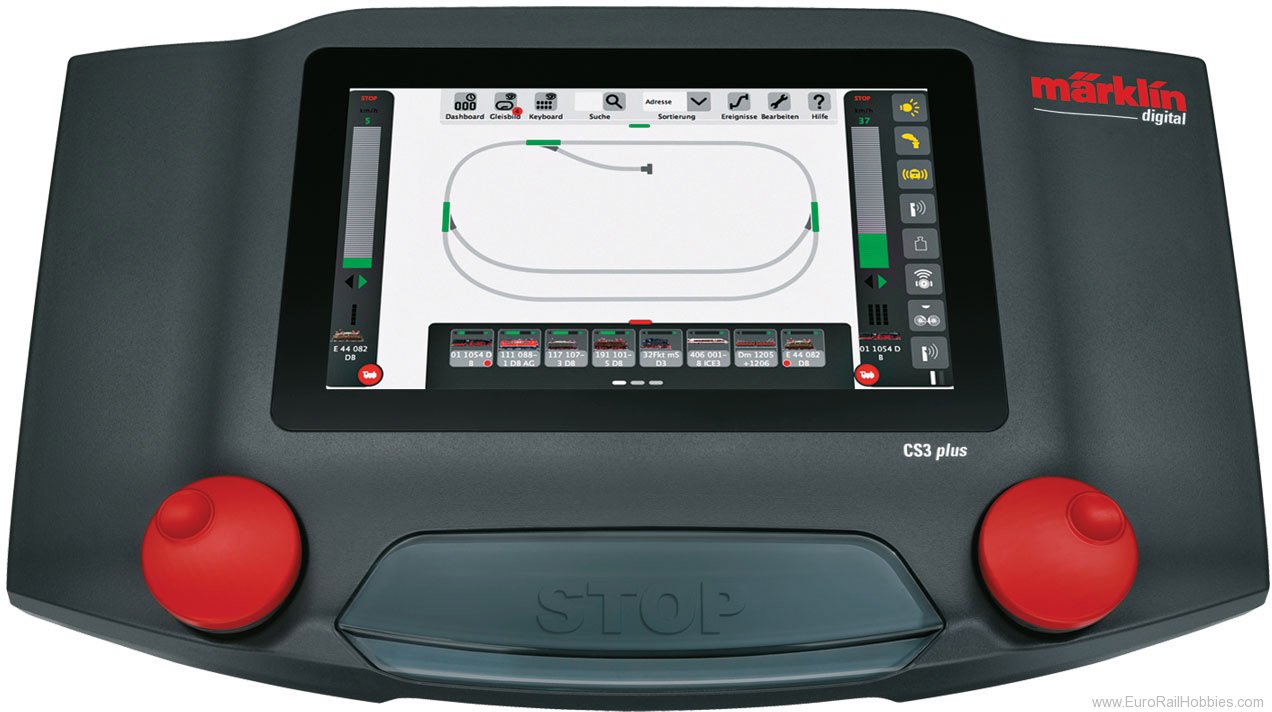 As a multi-protocol controller the Central Station 3 plus with its high resolution, modern color touch screen, 2 locomotive controllers as well as a built-in central track diagram control board offer the possibility of simple, easy control of locomotives and of the entire layout. Up to 32 functions can be controlled on locomotives, and up to 320 Motorola or 2,048 DCC solenoid items can be controlled among accessories. In addition, the Central Station 3 plus has 2 built-in locomotive card readers (for saving locomotive data on a locomotive card or for fast call-up of the locomotive by plugging in the locomotive card), an SD card slot for expanded storage as well as a built-in speaker for playing back typical model railroad sounds. A powerful Booster is built in to power the layout with current for trains and for accessories. Die Central Station 3 plus is multiple device capable, i.e. several Central Station 3 plus (60216) units can be operated together on a layout with the optional cable (60123). Additional locomotive controllers, additional Layouts, and Keyboards expand the operation of the layout whereby joint and separate configurations can be maintained in the Central Station 3 plus for the layout areas to be controlled. The Central Station 3 plus has a built-in s88 connection, 2 built-in USB hosts (such as for a mouse, keyboard, USB stick), a USB loading socket, a network connection for communication with a PC, connections for 2 Mobile Stations, a connection for external speakers as well as others for the Marklin Bus system. Load capacity at the feeder track: max. 5 amps, load capacity at the programming track: max. 1.2 amps. When using the 60061/60065 switched mode power pack there is a maximum output of 58 VA and a maximum current of 3 amps (when using the 60216 with the 60101/L51095 switched mode power pack there is a maximum current of 5 amps, recommended only for 1 Gauge/LGB. Please make sure that the wire cross section for your wiring is at least 0.5 square millimeters / 20 gauge or larger!). Dimensions 320 x 195 x 80 mm / 12-5/8" x 7-11/16" x 3-1/8".