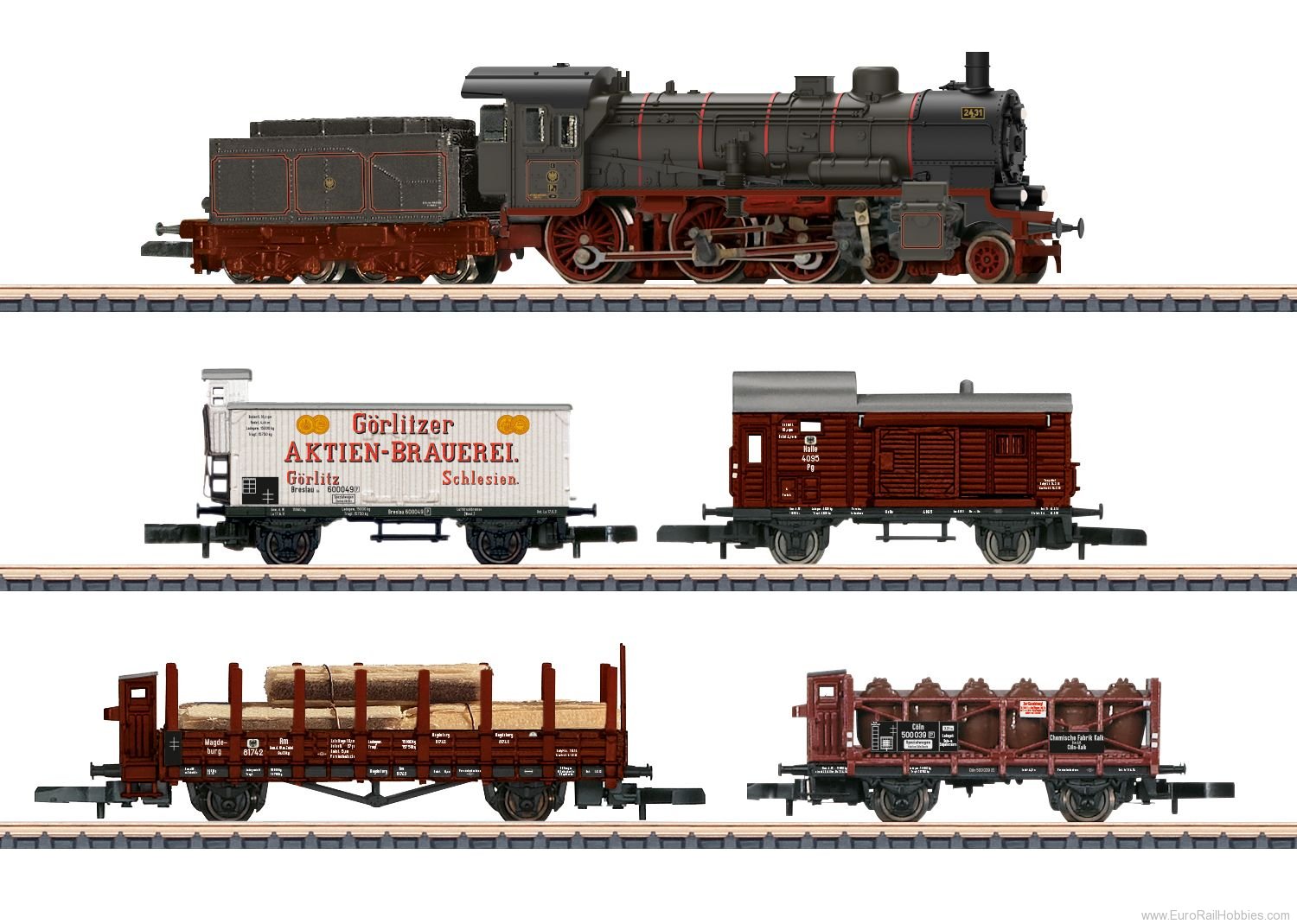 Model: The locomotive has a reworked mechanism with a motor with a bell-shaped armature. It also has prototypical, fully functioning valve gear, imitation brakes, and warm white LEDs for the dual headlights. The tender has spoked wheels.
The freight train baggage car includes doors that can be opened made of laser-cut architectural quality card stock. All of the cars are prototypically imprinted and in some cases have spoked wheels. A load of 5 stacks of rough cut-lumber is included. Length over the buffers approximately 268 mm / 10-9/16".

A Prussian "Delight" of a Special Kind - the Prussian provincial railroad freight train with a class P 8 and four classic freight cars. The so-called "Twelve Apostles Car" is particularly worth mentioning, an acid transport car with twelve stoneware pots for hauling aggressive substances such as sulfuric acid, oleum, hydrochloric acid, nitric acid, hydrofluoric acid, and phosphoric acid or also concentrated lyes or strong oxidizing chemicals such as hydrogen peroxide. The beer car for the Görlitz Incorporated Brewery transports classic German liquid. The cooling was done with water or dry ice using the level of technology for that time. The cold was distributed only by air circulation, which guaranteed a temperature of +4° C to -18° C / 39° F to 0° F. This meant that the beer arrived at the customer well cooled in any event. The set is completed by a stake car with a load of rough-cut lumber as well as the obligatory freight train baggage car. The famous "Jack-of-all-Trades" serves as motive power - the Prussian P 8. At the start of the 20th century, the Prussian State Railways urgently needed a powerful, fast three-axle steam locomotive for passenger service on lines in the Mittelgebirge and Hügelland areas. In 1905, Robert Garbe, at that time head of purchasing for locomotive procurement for the Prussian State Railways at the national railroad management office in Berlin, presented plans for a new 4-6-0 unit. Designated as the class P 8, it was initially planned chiefly as an express engine. Yet a small design flaw held the P 8 back: Its unsatisfactory mass balance caused very rough running at higher speeds. The maximum speed of 110 km/h / 69 mph desired by Garbe for the locomotive and thereby its suitability as an express locomotive could not be achieved due to the poor running characteristics. Its usual speed became 100 km/h / 63 mph. After correcting its teething problems, the P 8 actually developed into one of the most successful Prussian locomotive designs. By 1923, over 3,500 units of this 1,200 horsepower unit had been built for the German railways alone. Almost all of the German locomotive builders were involved in its production. The locomotives were stationed at almost every railroad maintenance district where they pulled passenger trains as well as freight trains and often express trains too.