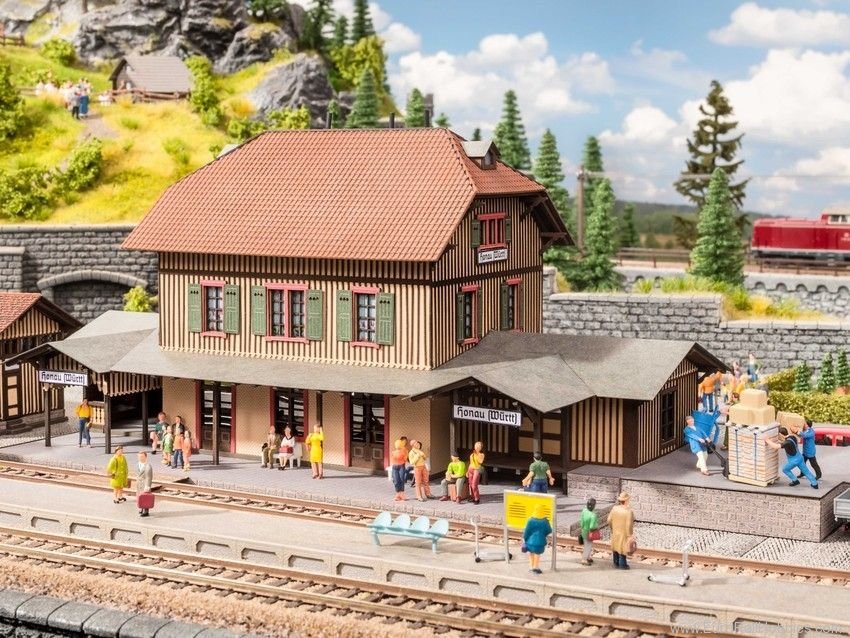 »On the Swabian Railway«
The »Echazbahn« between Reutlingen and Münsingen was finished in 1893. It was the first inaugurated standardgauge branch line in Württemberg and at the same time,
the last railway project with its own name.
The railway station »Honau« was centrally located: Here, Germans steepest standard-gauge rack railway started with a 100 ‰ gradient up to Lichtenstein. BR 97.5 locomotives were mainly used. After the Second World War, the route again had an important role in freight transport until its decommissioning in 1953. Being located completely in the French occupied sector of Württemberg, military transport could be organized on this line to the military training area in Münsingen without passing the American sector. Normally, a BR 50, BR 52, BR 57.10 or occasionally a BR 93.5 was put in front of freight trains. Due to the enormous gradient, a BR 97.5 rack railway locomotive had to be set at the rear of the trains for a propulsion operation.
The station building »Honau» with its two extensions is architecturally remarkable: The complete railway station was built in Swiss chalet style and served as a prototype for the »Einheitsbahnhof Württemberg« Type III respectively later IIIa, a standardized station building.
The wonderful »Krüppelwalm« hip roof construction as well as many of the elaborate details on bars, timber claddings and porches remained reserved exclusively for the »Honau« Station and have not been implemented in standardized stations due to financial reasons. After the decommissioning of the route in the mid of the 1950s, the
building fell into decay, until the preservation club »Förderverein Bahnhof Honau e. V.« took over the railway station voluntarily in 2003. Since then, a lot has happened and the building now shines in »old glamour«.

TOPPMODELL®
The »Honau« Station was already published by TOPPMODELL® years ago. The main building and the outhouse have been based on this model, but are significantly easier to build. The models do not have to be varnished extra as the building kits colours match already the natural model colours. Especially lovely have been realized the shadings, beam constructions, windows, shutters and a lot of other details.
In the TOPPMODELL® Exclusive Series, selected models - copied from their real models - are published. These are realized particularly realistic and in detail. The combination of selected materials and a high-quality colouring of some parts of the building kits made in Germany result in models of top class, simply real »TOPPMODELLE®«.