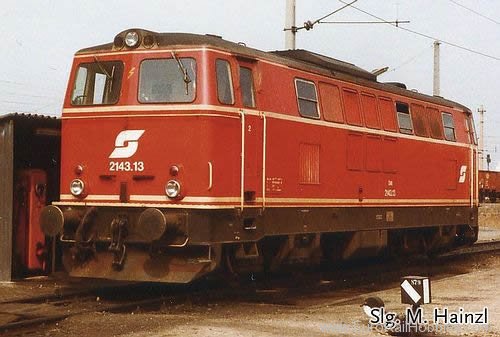 Diesel locomotive series 2143 of the OBB

Diesel locomotive Rh 2143 of the Austrian State Railway. The model version is in blood orange livery with an ivory roof and black frame, the adhesive numbers without computer numbers and emblem. he locomotives of the series 2143 were built from 1964 until 1977 and operated on not electrified main and branch lines especially in the East of Austria. They were used in front of passenger as well as freight trains. All in all it was 77 locomotives that were delivered to the OBB by the Simmering-Graz- Pauker company. The drive unit was a SGP-12 cylinder-4cycle engine with a power output of 1115 kW. The locomotive is equipped with a train heating generator and an auxiliary diesel generator for the compressed air. The transmission of power is provided by an hydrodynamic transmission from Voith.