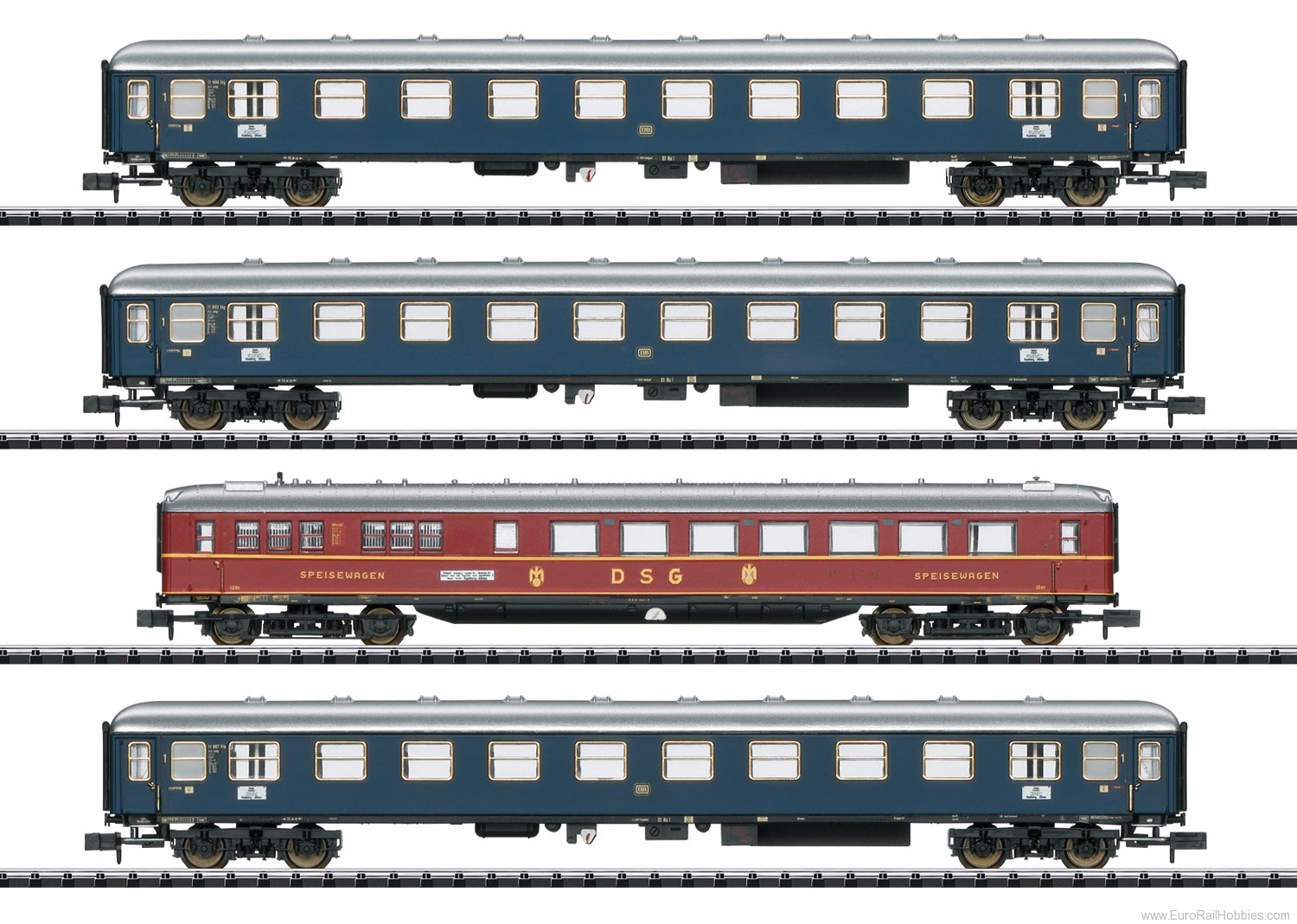 The "Merkur" stood for a mystique of the German Economic Miracle period. The precursors of the West German Economic Miracle became evident soon after the establishment of the German Federal Railroad (DB). The management at the DB recognized early on that the executives of the economy would require a reliable transportation network. The worst of the damage from World War II had hardly been removed, and as early as 1951, they were preparing a train network to connect the important West German urban centers with fast trains. The so-called "F-Zug" network had its roots in the express powered rail car network of the prewar period, but it had a significant difference. While the German State Railroad Company (DRG) had set up the network of "Flying Trains" before World War II focused on Berlin, the main routes of the "F-Zug" network ran from North to South due to the internal German border. Fast train connections were set up between Hamburg, Bremen, the Rhine-Ruhr area and Cologne, Frankfurt (Main), Stuttgart, Nürnberg, Munich, and Basle. They ran mornings and back in the evening in each case with few stops. This was planned to make it possible to do an external business appointment in one day. Naturally, this did not work for long distances such as Hamburg – Munich. In the style of the "FD" designation customary before the war, the train class was now called "F-Züge" / "F Trains", whereby the F stood for "Fern" / "Long Distance". In addition to the regular fare price, a passenger also had to have an "F" surcharge ticket for the trip. Starting in 1952/53, the train routes were given impressive names: The pair of trains F 4/3 (Hamburg-Altona – Frankfurt/Main – Hamburg-Altona) were thus given the name "Merkur". With "Blauer Enzian" / "Blue Gentian", "Gambrinus", "Helvetia", "Senator", "Roland" and ”Domspatz" – just to name a few – the "F" trains bore other illustrious names as the pride of the new German Federal Railroad.With the name "Merkur" (Mercury) as the "messenger of the gods", in the Roman religion the god of traders and thieves, the DB was paying its respects to the many commercial cities located on the route. Starting in the summer of 1952, the long-distance train F 3/4 ran as "Merkur" between Frankfurt/Main and Hamburg-Altona with intermediate stops in Wiesbaden (F 3)/Mainz (F4), Koblenz, Bonn, Cologne, Düsseldorf, Duisburg, Essen, Dortmund, Hamm, Münster, Osnabrück, and Bremen. In 1954, its run was even lengthened from Frankfurt Stuttgart with a stop in Heidelberg. Starting in the summer of 1957, the "Merkur" no longer served Dortmund and Hamm but took the more direct way between Münster and Essen via Haltern and Gelsenkirchen. As a rule, a class 03.10 steam locomotive initially pulled the train in the section Frankfurt – Hamburg. Starting in the summer of 1957, the section Stuttgart – Frankfurt was dropped and one of the new V 200 units from Hamm now powered the train on its entire run. As an "F" train from the beginning, the Merkur ran up to the end of the "F" train era in the summer schedule of 1971. Then, it was transformed into an InterCity.

All of the cars include LED interior lighting.LED marker lights.

On a business trip in the Economic Miracle period