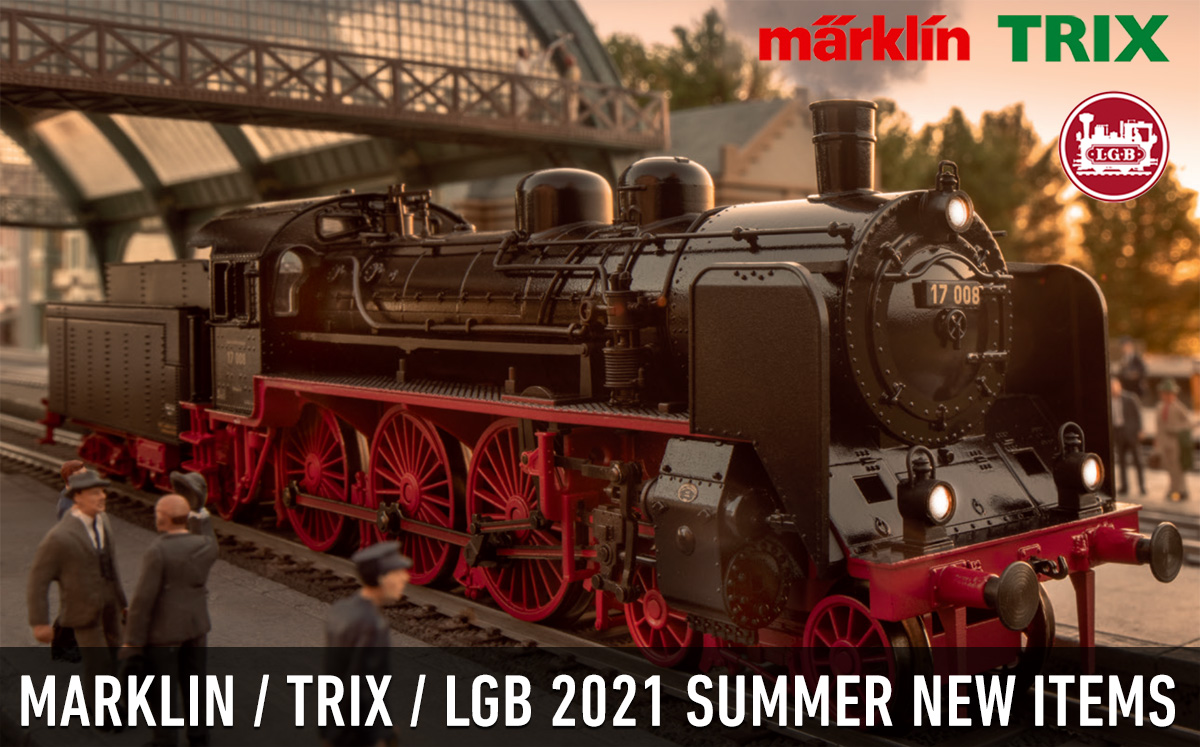 The following is a quick brief on this year’s Summer New Item Highlights from Marklin, Trix and LGB. It should be noted that the hobby industry as a whole has been severely impacted this past year in both a very positive and negative way. The positive, that most factories are running at 100% capacity and the negative is product delivery delays for a variety of reasons. These include a lack of raw materials, digital components, etc. Worst of all, the exorbitant shipping costs coupled with delivery delays from both the airline and shipping industries has added many significant challenges all around.  Thus, the number of new item announcements has been limited in order to ensure a reasonable delivery fulfillment.

29469 – A modest starter set with the Mobile Station at a great price is a terrific start into Marklin. Though this locomotive has been in the program for quite a period, it has been digitally upgraded to provide all available sound features as well as flashing warning lights. A great way to expand this set when ordering is to order the digital bypass extension set, # 24802.

37197 – Major New Tooling Upgrade for the BR 17 Steam Locomotive. It is being released as a ERA II DRG Model and is as well shown as a Era VI model due to the fact that the locomotive is a Museum Loco still in existence today in Berlin’s Technology Museum. This locomotive has been given a complete update in;

37298 – Class G 2000 BB Vossloh heavy diesel locomotive with symmetrical cabs. This Model was previously released as Road # 1101 and sold out very quickly. The demand has been high for the return of this model and so the factory is releasing this as Road # 1102. If you we’re fortunate enough to have the previous model, you could easily do a prototypical scene by double-heading both locomotives. This locomotive is a well limited and will no doubt sell out quickly again. 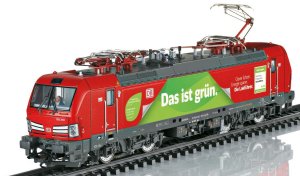 39197 – This DB AG Class 193 Loco represents the “Das ist Grun” or (That is Green) theme. There is one locomotive in this theme operating in Germany to this day. It is therefore being offered as another MHI Exclusive edition #2/2021 and therefore limited quantities. A great 4 Piece 'Wind Power' Stake Car Set (MHI 2/2021 Exclusiv Item) to go with this locomotive is stock # 47134.

39199 – This SBB Class 193 Loco is leased to SBB Cargo International, Inc. Locomotive name "Limmat". The SBB like to name their locomotives after cities, towns or villages and in this case the town of “Limmat”. The use of this name has been made exclusive to Marklin so no other manufacturer will be able to use this specific model.

39829 – This is a DB AG Class 182 (Taurus) Locomotive in a Coco Cola Theme. This is not a true life theme, but Marklin has once again offered something special to those that are Coco Cola Collectors. 2 Car Sets are being offered. An SBB version # 48344 true to the original and a German version # 48345.

43815 – DB Airport Express 3 Piece Passenger Set – This set comes with factory built-in LED Lighting. A typical locomotive that would have pulled these coaches is a DB Class 110 # 37108.

47812 – DB AG Type Sggrss 80 Double 'Marklin' Container Transport Car. These cars are reserved for the Marklin super stores in Germany. We have managed to secure a number of these for our loyal customers. Unfortunately, we are not allowed to advertise this particular model on our site. You will be able to find pictures of this model on the Summer New Items brochure page 18. To secure your model, simply give us a call toll free at 1-866-799-6098 and we will manually add one to your order. These are EXTREMELY Limited so, do not hesitate to reserve your model quickly.

Accessories – We we’re once told that if you wait long enough, Marklin will eventually deliver the wants of its loyal consumers and so, we finally have it. LED Lighting kits for the Thunder Box Coaches. Now you can retrofit all your coaches with LED Lighting Kit # 73300 and the appropriate pick-up shoe # 73301 for coaches and # 73302 for the baggage coach. Now if they would only deliver the wide radius double slip switch for C Track, then we would really celebrate! 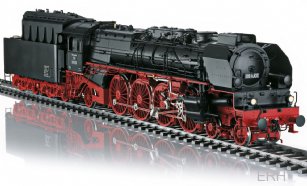 With last year’s delivery of the incredible French SNCF 241 Steam Locomotive, Marklin now presents the DR Class 08 under stock # 55081. The DR‘s French Lady is presented in breathtaking rich detail in the royal class of Märklin 1. Remaining in the GDR (East Germany) as a reparations locomotive, this one-of-a-kind locomotive became a true cult legend among more than just railroad fans.

Note: The SNCF 241 sold out extremely fast as did the HO Versions including the DR version. If you ever wanted an absolutely incredible 1 Gauge Steam Locomotive, this will be a MUST have for your collection. Reserve yours early to avoid disappointment and collector pricing.

In Z, we have a number of new interesting models and here are a few highlights; 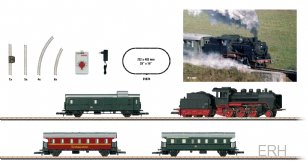 81874 – DB Museum Passenger Train Starter Set – A new starter set in Z is always welcome as they represent a terrific value to get you into this delightful scale of 1:220. The reason they call this a Museum starter set is that the one coach painted in a red livery with a logo of RESTAURATION which would be a typical snack car for today’s tourists visiting various railway museums.

88168 – DB Class 796/996 Rail Busses being released as a 2 piece set. Both with interior LED lighting in the control and motorized car.

88792 – DB CL 218 Diesel Locomotive featured as part of the MHI Exclusive # 2/2021 program. Although the 218’s we’re extensively used in both freight and passenger traffic, Marklin is offering a  3 piece DB Commuter Coach set to go along, stock # 87189 and its also part of the MHI Exclusive # 2/2021 program. Its important to note that the Cab Control Coach is complete new tooling as well and its nickname known as the Rabbit’s Hutch as there was very little room for the conductor. This coach has a headlight and marker light that change over with direction of travel.

LGB offers only 5 new items for summer, but what they do offer is quite amazing given production limitations these days.

21430 – The RhB is now phasing out the Ge 4/4 II series locomotives and they are being replaced with the III electric series. Highlights include;

21480 – This is the DR Steam Locomotive VII K, Road Number 99 731 which represents Complete New Tooling for LGB. Although similar in appearance from earlier 99’s, there are very notable differences. For instance, the boiler on these are considerably larger and much lower to the chassis. As well, these have front and rear pilot wheels just to mention a couple. Other highlights include;

Of course, one needs to pull passenger coaches and what better way with a new locomotive then 2 new passenger coaches from the SOEG. These can be found under stock # 36356 and # 36357. These cars look as they do currently in operation with new “REKO” or Reconstructed Windows.

We hope this newsletter has been insightful and wetting the appetite for adding new exciting models to your railway and collections. Remember to order early as many items are one-time issues and/or MHI Exclusive models that will sell out quickly. Reserve your favorites and ensure arrive of your favourite models.