Advanced Search Options:
< Go Back
< Previous
Product 1 of 45
Next > 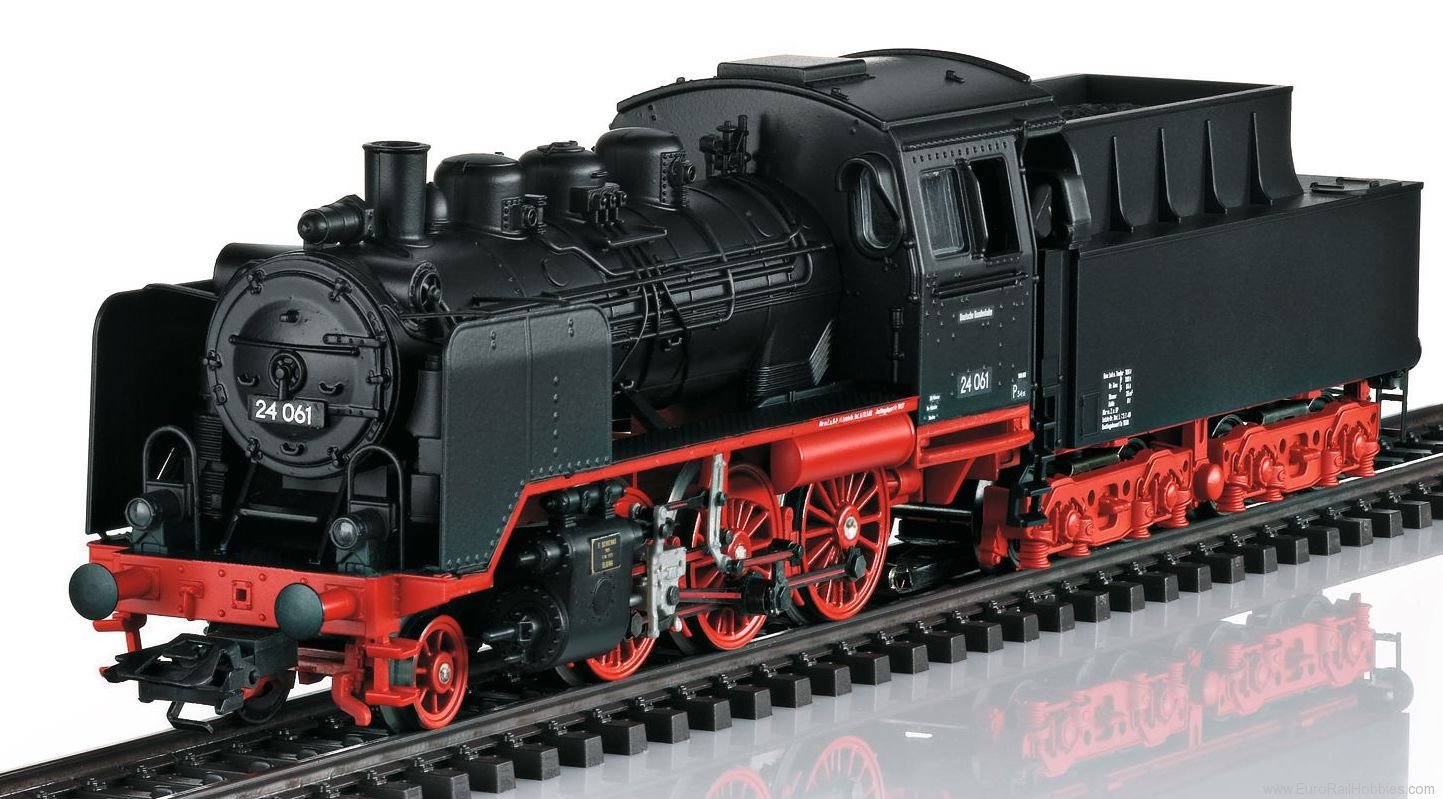 "Prairie Pony" with a Large Range
This locomotive went into railroad history as a one of a kind of the brand new German Federal Railroad. Newly equipped with the tender of a class 50, this "Prairie Pony" went into service on the road in 1949 as an experimental locomotive with a much higher operating range.

Prototype: German Federal Railroad (DB) class 24 passenger steam locomotive with a type 2''''''''2'''''''' T 26 tender from the class 50. In 1948, this locomotive was equipped with the larger tender for use at the Göttingen testing institute. This tender could clearly take on more water than the standard tender could. With its cab''''''''s back wall, it could run in reverse at speeds up to 80 km/h / 50 mph. Standard design locomotive with small, originally Wagner smoke deflectors. Locomotive road number 24 061. The locomotive looks as it did around 1950.

Model: The locomotive has an mfx digital decoder and extensive sound functions. It also has a special motor in the boiler. 3 axles powered. Traction tires. The boiler is constructed of metal. The locomotive comes with a factory-installed 72270 smoke unit. The dual headlights change over with the direction of travel. They and the built-in smoke unit will work in conventional operation and can be controlled digitally. Maintenance-free, warm white LEDs are used for the lighting. There is a close coupling with a guide mechanism between the locomotive and the tender. There is a close coupler with an NEM pocket and a guide mechanism on the rear of the tender. There is a close coupler in an NEM pocket on the front of the locomotive. The tender comes from the class 50. Figures of an engineer and a fireman are included. Length over the buffers 19.4 cm / 7-5/8".

Locomotives for branch line service were not initially included in the DRG''''''''s standardized type program because the acquisition of new main line locomotives enjoyed a priority. New construction of the classes 24 (with a tender), 64, and 86 branch line units was not decided until later. The first 17 units of the class 24 were delivered in 1928 by Schichau (24 001-010) and Linke-Hofmann (24 031-037). A year later 69 units of these 90 km/h / 56 mph fast and 900 horsepower locomotives were already running in the districts of Stuttgart, Stettin, Schwerin, Regensburg, and Münster. The class 24 was in many ways similar in construction to the class 64 2-6-2T tank locomotive. The boiler placed well to the front due to the more favorable weight distribution was striking. This caused the smokestack to be offset from the cylinders compared to the other standard design locomotives. The last of the 95 units of the class 24 were not taken until 1940. At the end of the Thirties most of these locomotives went to East Prussia and ran there on long branch lines. This resulted in their nickname "Prairie Pony". It was thus no wonder that after World War II almost half of the class 24 remained outside of the two German states. The later German Federal Railroad had 42 units overhauled. One conversion after the war attracted particular attention: The Testing Institute (PA) for Locomotives and Powered Railcars in Göttingen was looking for a lightweight passenger locomotive in 1948 for test runs. The PA struck it rich in Husum with road number 24 061 stored there. During a main overhaul it was given a four-axle type 2''''''''2''''''''T26 tender instead of the usual three-axle tender to extend its operating range. Starting in March of 1949, this locomotive (length over the buffers 19,380 mm / 63 feet 6 inches, weight 107 metric tons) was used for testing and gave marvelous results. Praise was given above all to the locomotive''''''''s smooth running which was also due to the four-axle tender. In August of 1953, this unit had to go back into regular service. This one of a kind was retired in November of 1962 at Lübeck. The use of the class 24 locomotives on the DB concentrated in the North and chiefly in the Western part of the country. Rail busses and new diesel locomotives made life for the locomotives in passenger service increasingly harder with the beginning of the Sixties. As early as 1965 and 1966 the last five units were therefore put into storage at the railroad maintenance facilities in Rahden and Rheydt. The retirement of road number 24 067 by the railroad maintenance facility in Rheydt on August 19, 1966 effectively ended this chapter on the DB.