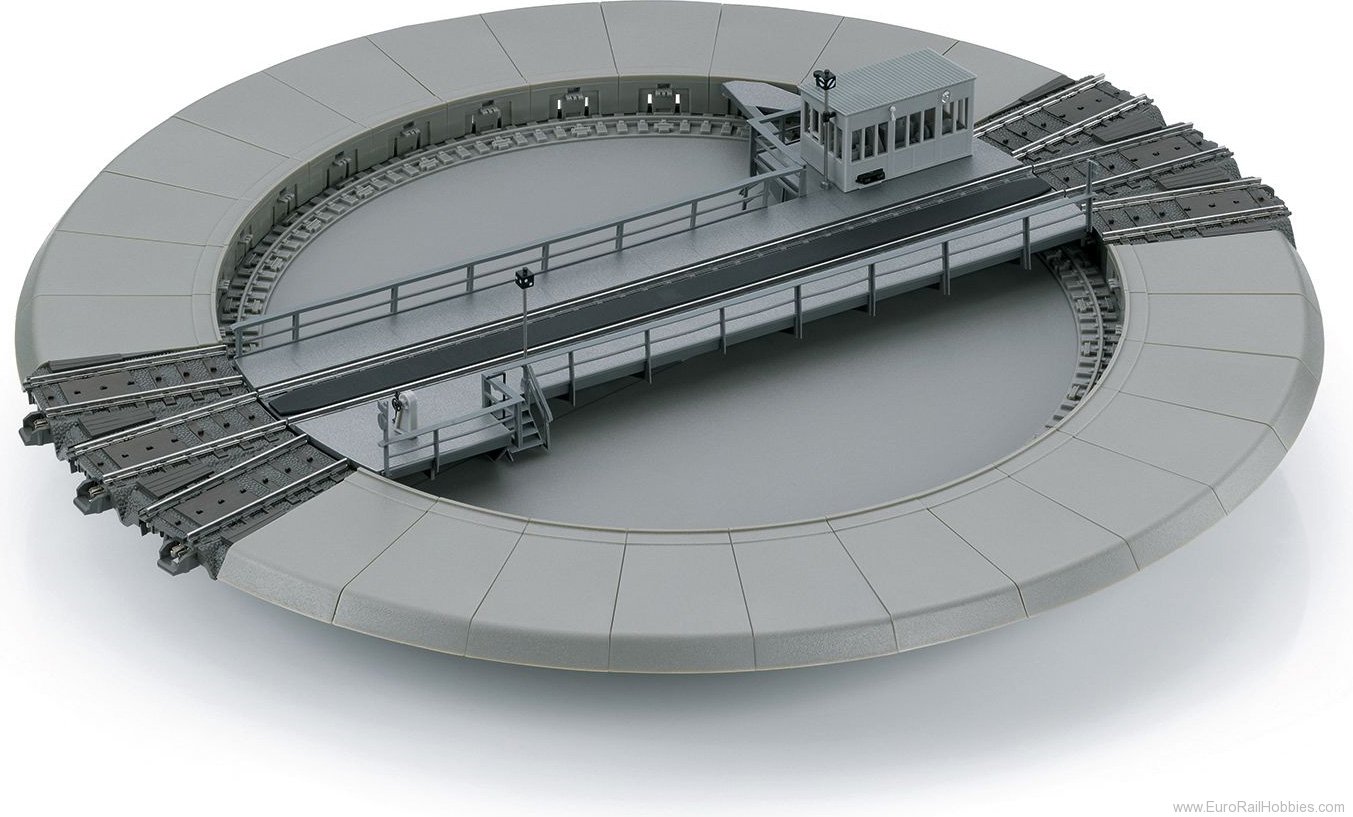 NEW! Scroll down for videos!

Turntables Early on in railroading, the problem had to be faced of turning steam locomotives. The rather complex propulsion technology for steam locomotives meant that chiefly locomotives with tenders had completely different running characteristics for technical reasons in forward and reverse. Furthermore, crews had a poorer view down the track when running the locomotive in reverse. Passengers or sensitive freight also had to be protected from too much steam and smoke, so that the smokestack had to be in the front when running the locomotive forward. Railroad engineers thus developed turntables early on for turning steam locomotives and sometimes cars. These turntables had to make use of every possibility in the smallest amount of space. By definition, "turntables are movable tracks mostly mounted on special support structures. They can be turned around a vertical axis and serve to transfer locomotives/cars or wheelsets from one track to another or to turn the locomotives/cars." In the early years of railroading many small turntables could be found all over railroad property. They assumed a distribution function in the operations. Complex turnout combinations were not yet common. With locomotives becoming larger and heavier, turntables also had to grow and quickly found as a rule a single location in front of the roundhouse locomotive sheds of a maintenance facility located close to a station. They were also needed as a means of turning locomotives at rectangular locomotive sheds and large freight yards sometimes had a separate turntable for fast turning of locomotives. The German State Railroad's standard design turntables in 1920 still had a diameter of 20 meters / 65 feet. This increased in 1928 to 23 meters / 75 feet with the introduction of longer locomotives and several years later, there were even individual units in use with a diameter of 26 meters / 85 feet. Most units used electric motors for a drive system. Only seldom was diesel or compressed air used. On smaller turntables, even muscle power was often enough. Most turntables had a cab as protection against weather for the attendant working there all through the day. This cab turned with the turntable when the latter was in operation.

This is a DB standard design 23 meter / 74 foot 9 inch turntable. It is designed for conventional and digital locomotive operation. The remote controlled deck has a built-in motor. It can only be controlled digitally with the Mobile Station 2 and Central-Station 2 and 3 (not included). Control with the Central-Station 2 and 3 is especially easy by means of track indexing (after carrying out an update), or with different digital central controllers that use the DCC digital format. Function: The deck turns right/left and the pit is designed for sunken installation in the layout. 6 track spoke connections for C Track are included for insertion at the location of your choice. The spoke angles are in the C Track grid spacing of 12°. The turntable can used with K Track by means of the 24922 adapter track and with M Track by means of the 24951 adapter track. A maximum of 30 track spoke connections in the spacing of 12° can be done with the 74871 expansion set. Locomotive operating current is supplied to the track spoke connections by means of the turntable deck. The external diameter of the turntable with one each spoke track opposite each other is 382 mm / 15-1/32". The diameter of the pit without spoke tracks is 278 mm / 10-15/16". The deck length is 263 mm / 10-3/8". This turntable can be used with the 72886 roundhouse locomotive shed. Various sound functions can be controlled. LEDs are used to light the turntable operator's hut and the outside lighting and they can be controlled.

See more videos of the new turntable on the Marklin YouTube Channel. For a basic english translation, watch the video on a desktop web browser and turn closed captions on, then choose Auto-translate - English.