Advanced Search Options:
< Go Back
< Previous
Product 1 of 98
Next > 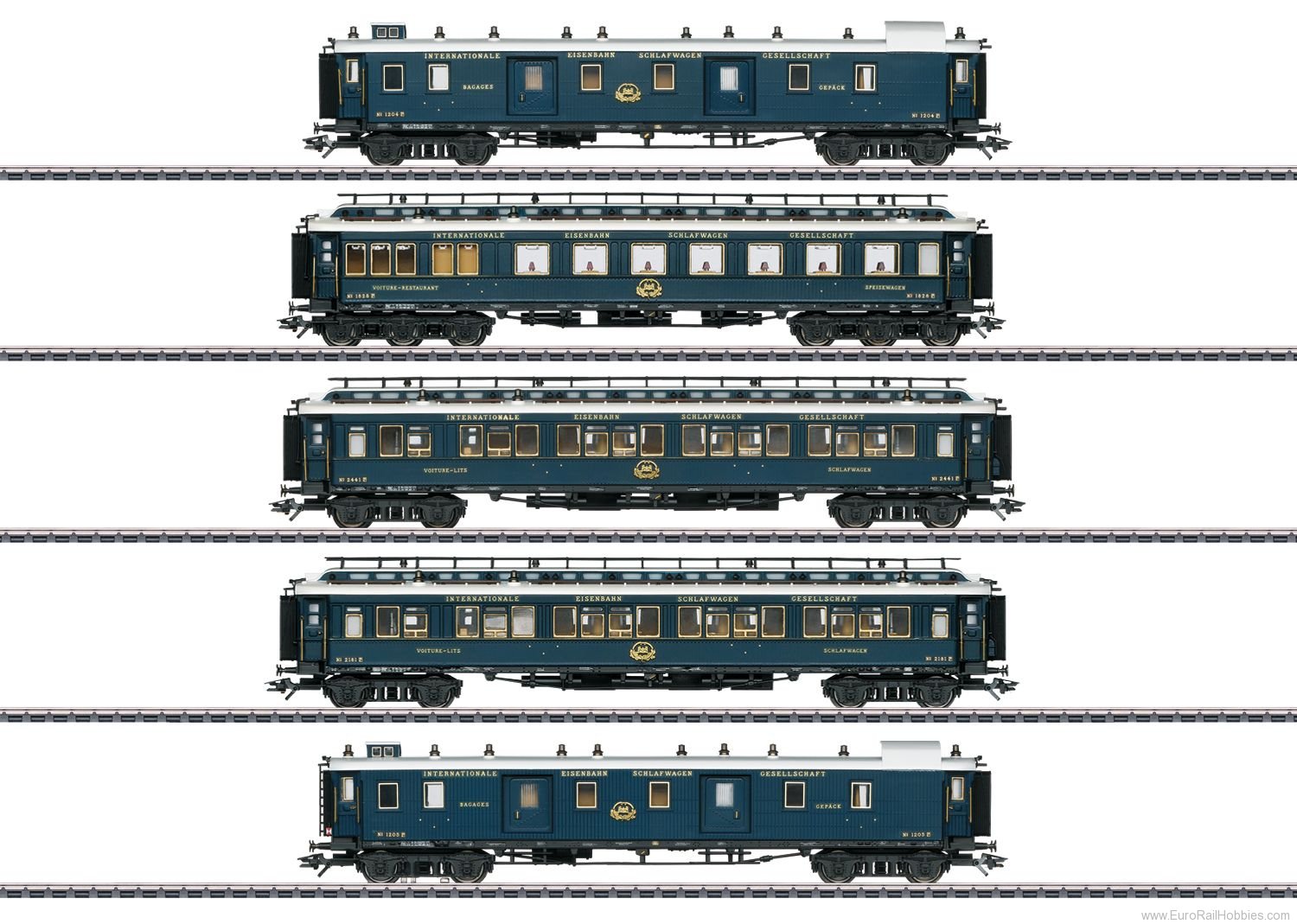 Model: The models are finely constructed with many separately applied details. The interiors are done in different colors. The cars have different car numbers. One baggage car has a factory-installed mfx digital decoder, for controlling light and sound functions as well as red marker lights. Retracted diaphragms with walkover plates folded up are included for end cars in the set. Only a close coupler in a standard coupler pocket is installed at each of these ends of the end cars. The doors on the baggage cars can be opened. All of the cars have factory-installed LED interior lighting and factory-installed current-conducting close couplers that can be uncoupled. Table lamps in the dining car are lighted and together with the interior lighting and the red marker lights will work in conventional operation and can be controlled digitally. The current-conducting close couplers can be replaced by current-conducting fixed drawbars included in the set. There is a pickup shoe for current pickup on one baggage car. Total length over the buffers 117.5 cm / 46-1/4".

This car set can be found in a DC version in the Trix H0 assortment under item number 23219.

Simplon Orient Express After World War I, the victorious powers were forced to find a new route for the Orient Express, since the terms of the Versailles Treaty forbade transit through German and Austro-Hungarian areas. Actually, only a route south of the Alps was considered, whereby the Simplon Tunnel between Switzerland and Italy played a crucial role. The Simplon Tunnel built in 1898 to 1905 (first tube) and in 1912 to 1921 (second tube) at 19.8 km / 12.4 miles was the longest mountain tunnel in the world until the end of the Seventies. On April 11, 1919, the brand new Simplon Orient Express ran for the first time from Paris across Switzerland through the Simplon Tunnel to Milan and further to. Initially, connecting trains ensured the connection via Zagreb to Belgrade. Starting in January of 1920 the Simplon Orient Express was able to run continuously to Belgrade and in the summer of the same year even to Istanbul (at that time still called Constantinople). In addition, there were now through cars to Bucharest. As another special feature, the Simplon Orient Express ran daily in the years between the wars. Its run began in the Paris station Gare de Lyon in the evening hours, after the through cars arriving from Calais with the "Flèche d´Or" ("Golden Arrow") (connection to the canal ferries from Great Britain) had been coupled to the train. It came to Brig via Dijon, Vallorbe, and Lausanne and then hurried through its namesake Simplon Tunnel, in order to reach the Italian Domodossola. The next morning it went on via Stresa, Milan, Verona, Venice, and Padua to Trieste. After Trieste came the second night run via Ljubljana, Zagreb, and Vinkovci to Belgrade. The through car to Bucharest was uncoupled in Vinkovci and then reached the Rumanian capital by avoiding Hungarian territory going via Subotica, Timi?oara, Or?ova, and Craiova. In Belgrade, the train received through cars depending on the day from the "Orient Express" reintroduced starting in 1921 as well as from Berlin, Ostend, or Prague. The Simplon Orient Express then continued its run via Ni?, Sofia, and Svilengrad, until it reached the station Istanbul-Sirkeci the morning after the third night. In the Twenties and Thirties, the new Simplon Orient Express became the most luxurious form of transport for the Balkans, Turkey, and the Middle East, preferred by diplomats, artists, authors, and wealthy tourists. A remarkable sidebar story: In February of 1929, the French weekly "l´Illustration" reported about a violent incident. About 80 kilometers / 50 miles north of Istanbul, near Tscherkessköy, the Simplon Orient Express remained stuck in a massive snowfall for five days. Apparently, this event inspired the mystery writer Agatha Christie for her novel "Murder on the Orient Express". She herself was an enthusiastic patron of the train.