Advanced Search Options:
< Go Back
< Previous
Product 1 of 20
Next > 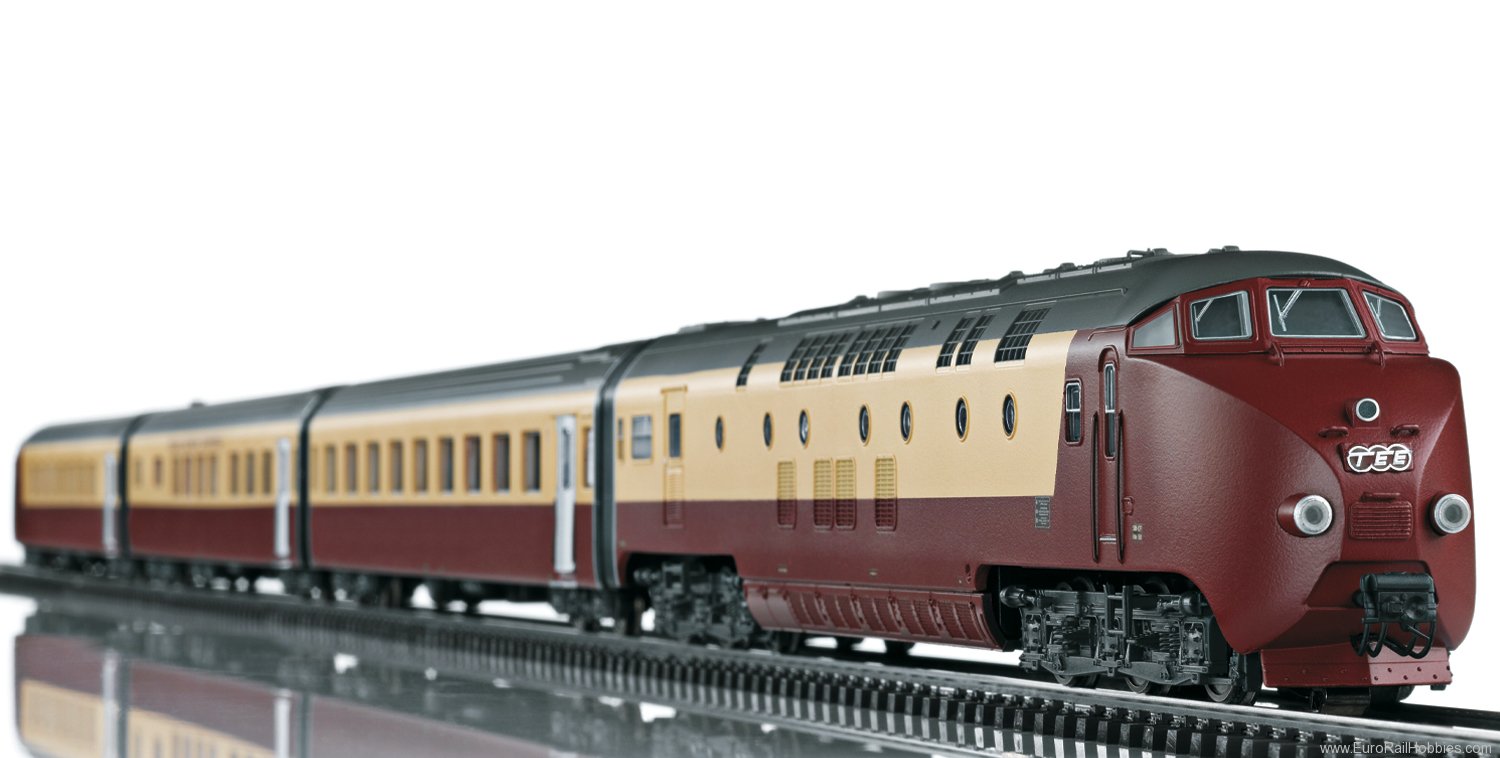 Model: This is a 4-part unit. It has an mfx+ digital decoder and extensive sound and light functions. It also has controlled high-efficiency propulsion with a flywheel, centrally mounted in the motor car. Two of the 3 driving wheelsets in each of the two 3-axle trucks are powered through cardan shafts. Traction tires. The train has factory-installed interior lighting in the compartment, dining, and open seating cars. The triple headlights and dual marker lights that change over with the direction of travel as well as the interior lighting will work in conventional operation and can be controlled digitally. The interior lighting in the baggage compartment of the motor car can be controlled separately in digital operation. The engine room lighting in the motor car, the cab lighting in the motor car and in the cab control compartment of the open seating car, and table lamps in the dining car can each be controlled separately in digital operation. Maintenance-free warm white and red LEDs are used for the lighting. There is a multi-conductor special current-conducting coupling with a guide mechanism between the powered railcar train units for a continuous electrical connection for the entire train. The train has a pickup shoe circuit with current pickup at the front of the train, either the motor car or the open seating car with a cab control compartment. The train has many separately applied details. The Scharfenberg coupler (non-working) is modelled at both ends of the train. The minimum radius for operation is 437.5 mm / 17-1/4". The train can also be run on Radius 1 if you ignore the clearance gauge. Total length of the powered railcar train over the couplers approximately 113 cm / 44-1/2".

SBB Class RAm Diesel Powered Railcar Train, TEE "EDELWEISS"After the introduction on June 2, 1957 of a high-quality TEE network agreed in 1954, the Swiss Federal Railways (SBB) and the Dutch Railways (Nederlandse Spoorwegen - NS) agreed in 1955 on the joint development of a new diesel powered railcar train in the configuration VT+VM+VM+VS. The power units were built by Werkspoor in Amsterdam. Switzerland with SIG in Neuhausen for the intermediate cars and the cab control car and Brown-Boveri in Baden for the electrical equipment was responsible for the rest of the train. The striking shape of the ends of the end cars is due to the industrial designer Elsebeth van Blerkom employed at Werkspoor, which took the egg shape as a prototype. The body of the power car was done as a torsion-resistant, self-supporting tube design with a cab, engine room, baggage compartment, rest areas, and an employee''s toilet. In the engine room were two supercharged Werkspoor type RUHB 1616 diesel motors with 16 cylinders in a V form (each motor 1,000 horsepower / 735 kilowatts). The flange-mounted main generators respectively provided the current for two each BBC traction motors (each 292 kilowatts continuous output), which were geared to the end wheelsets of both three-axle trucks. A third four-stroke diesel motor, Werkspoor type RUB 168, with eight cylinders and 300 horsepower output powered the onboard network, the air conditioning, and the dining car galley by means of a generator. The bodies for the intermediate cars and the cab control car were also constructed as self-supporting, stiff tube designs similar to the SBB lightweight steel cars and they were equipped with a standard SBB truck design. In order to provide passengers with pleasant travel, special comfort features were made available such as double-glazing of the large windows with blinds in between, which could be operated easily by passengers by means of a crank handle. Each car had air conditioning to maintain a constant temperature and continuous freshening of the air. All of the individual seats were extendable, equipped with adjustable seatbacks, and covered with top quality upholstery material.All five powered railcar trains (SBB RAm 501–502, NS DE IV 1001–1003) were based in Zürich and used for the following TEE trains: "EDELWEISS" Zürich – Amsterdam, June 1957 – May 1974), "Étoile du Nord" (Amsterdam – Paris, June 1957 – August 1964), "L´Oiseau bleu" (Paris – Amsterdam, June 1957 – May 1964), "L´Arbalète" (Zürich – Paris, August 1964 – September 1969), and "Bavaria" (Zürich – Munich, August 1969 – February 1971). After the disastrous accident of the "Bavaria" at Aitrang on the evening of February 9, 1971, the remaining trains were still in use until the end of May 1974 as the TEE "EDELWEISS". In 1977, they were sold to the Canadian Ontario Northland Railway for use on their 388 kilometer / 242 mile long line Toronto – Timmins. After the end of their use in 1992, two cab control cars, two compartment cars, and a dining car were brought back to Europe in 1998, where they are currently being refurbished in the Netherlands.


The class RAm TEE diesel powered railcar train is being produced in 2020 in a one-time series only for Insider members.

This model can be found in a DC version in the Trix H0 assortment under item number 22976 exclusively for Trix Club members.