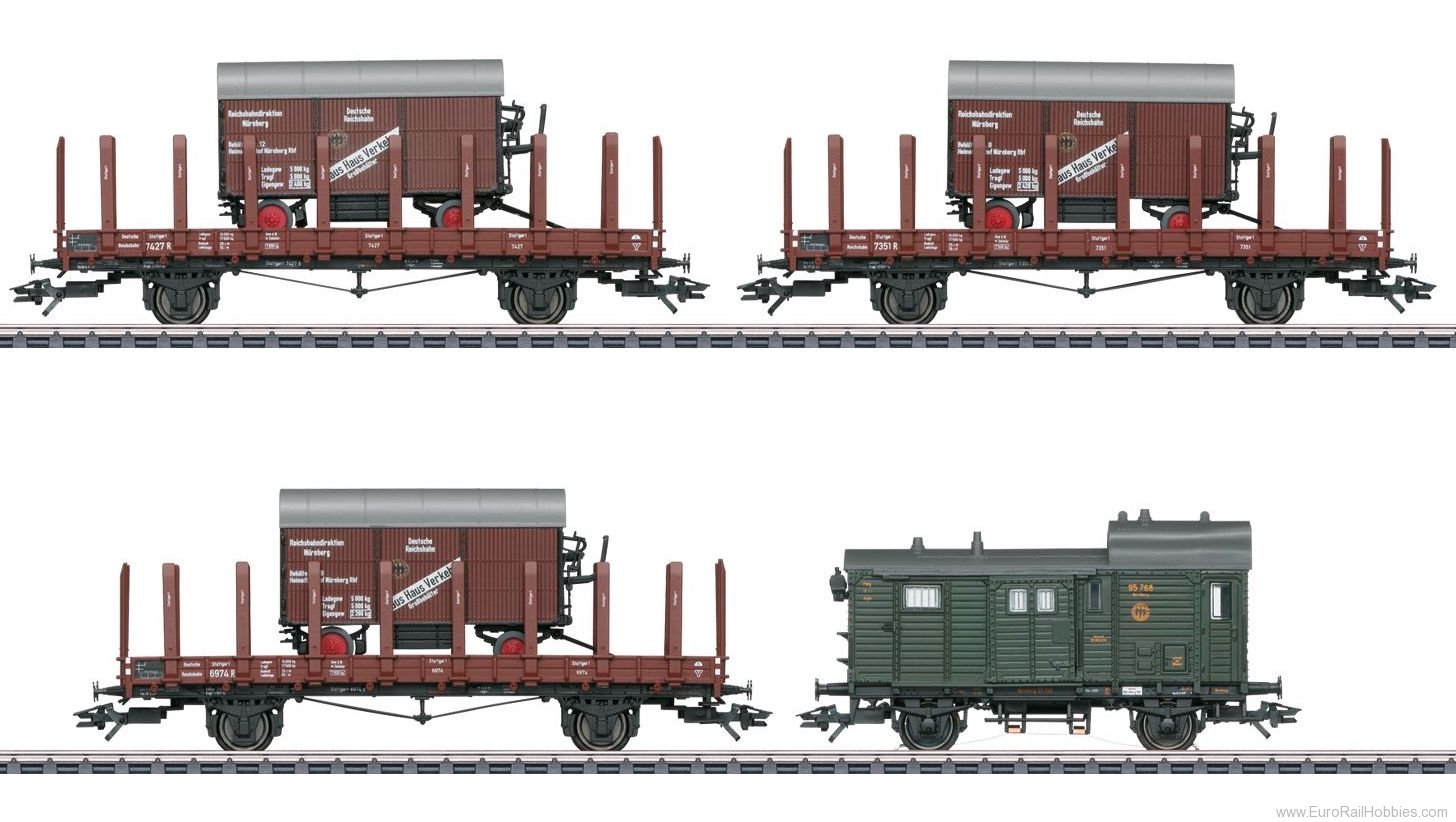 Model: The stake cars have truss rods. All of the stake cars are each loaded with a high capacity container with gear for running on roads. Stakes that can be installed on the cars are included. The freight train baggage car has a cupola, new LED marker lights, and a pickup shoe already mounted. The high capacity containers include different registration numbers. Total length over the buffers approximately 51.5 cm / 20-1/4".

A steam locomotive to go with this car set can be found in the Märklin H0 assortment under item number 39961.

Starting in 1930, the German State Railroad (DRG) had to cut back its freight hauling capacity rapidly due to the global economic crisis. In 1932, it even lost money for the first time. The DRG saw one possibility for mastering the crisis in combating the competition from road traffic that had started as early as the Twenties. Chiefly freight transport by truck had already caused the DRG headaches before the global economic crisis. The German State Railroad now attempted to curtail this with very innovative ideas. It expanded and intensified the door-to-door services with Culemeyer road rollers, with standardized containers as forerunners to container transport, and with the transport of truck trailers on stake cars. The latter can rightly be seen as a forerunner to today''''s piggyback service where semi-truck trailers or entire rigs are transported on special railroad cars with low load heights over long routes. This innovative transport concept is clearly shown with this car set with its three "piggyback cars" as well as with the obligatory freight train baggage car. A brawny class 96 steam tank locomotive serves as the motive power. When first put into service, this locomotive laid claim as the largest and most powerful tank locomotive in Europe. As the Bavarian Gt 2x4/4, it was the crowning point of Mallet locomotive construction in Europe. It had its origin in the desire of the Bavarian State Railroad to haul considerably increased freight loads in the first years of the 20th century with only one pusher locomotive over the existing three steep routes in Bavaria/Franconia (Laufach - Heigenbrücken, Frankenwald Ramp, Schiefe Ebene). The locomotive builder Maffei therefore developed the Gt 2x4/4 by 1913 with the wheel arrangement 0-8-8-0T. The unit had two sets of running gear, each with four coupled wheelsets. The 15 units delivered in the years 1913/14 were substantially faster than and up to three times as powerful as the previously available freight locomotives thus making possible tangible savings in locomotives and crews. At their first test runs, these new locomotives showed the complete range of their capabilities: A 1,000 metric ton freight train could be hauled with a class Gt 2x4/4 pulling and a pushing locomotive in an incredible 38 instead of the previous 80 minutes from Pressig-Rothenkirchen to Steinbach a.W. In 1922/23, another order was placed for ten more units of the class Gt 2x4/4 with several design improvements. The DRG took all 25 units into its roster and gave them the road numbers 96 001-025. They were then also used partially outside of Bavaria.