Advanced Search Options:
< Go Back
< Previous
Product 1 of 57
Next > 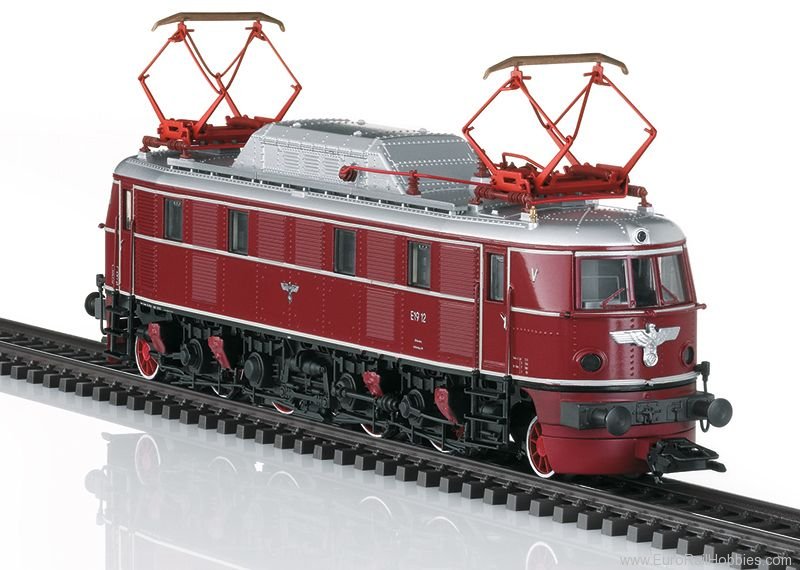 Prototype: Class E 19.1 electric locomotive in a crimson basic paint scheme. Design in the museum version of the DB Museum in Nürnberg. Lettered as E 19 12 of the former German State Railroad (DR), Era II. The locomotive looks as it did in Eras II/VI.

The locomotive has an mfx digital decoder and extensive sound functions. It also has controlled high-efficiency propulsion with a flywheel. 2 axles powered. Traction tires. Triple headlights and dual red marker lights change over with the direction of travel, will work in conventional operation, and can be controlled digitally. The headlights at Locomotive End 2 and 1 can be turned off separately in digital operation. The locomotive has the "Double ''''''''A'''''''' Light" function. Maintenance-free warm white and red LEDs are used for the lighting. The engineer''''''''s cabs and the engine room have interior details. A locomotive figure is included for installation in the cab. The locomotive body has numerous separately applied details. The locomotive has prototypical double arm pantographs. The locomotive running gear has prototypical modelling of the quill drive wheels. The buffers are constructed of metal separately applied in convex and flat versions. Length over the buffers 19.5 cm / 7-11/16".