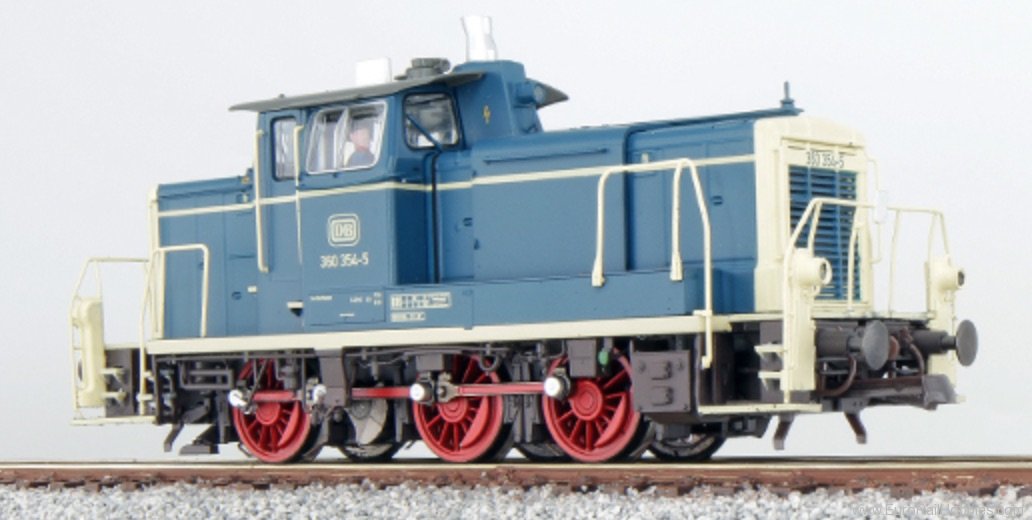 our price
$449.95 USD
Temporarily out of stock
(Available to order ) 
add to cart

The DB-V60 is completely new as an ESU model! Chassis, body, engine, gearbox, chassis including intake, smoke unit, lighting, digital coupler, speakers and all details have been redeveloped. The lamp inserts have vertical engravings to match the look of DB unit lanterns.

The conversion from AC (factory setting) to DC operation is done by pulling off the center grinder and by switching over a small slide switch immediately in front of the front axle.

The digitally remotely controllable, electromagnetic coupler sits in a standard shaft, is two-level height adjustable and can be easily replaced if necessary, thanks to connectors without soldering or replaced by any coupling.

Completely new is the LokSound 5 decoder. Silky driving characteristics and a number of useful functions and adjustment options inspire the operator. For example, there is a Heavy Duty feature that doubles the acceleration and deceleration times and makes the engine sound at higher engine speeds. With the "locomotive brake", the locomotive goes into idle and slows down a little more - if necessary, to a standstill. In shunting, the locomotive accelerates and decelerates more than in normal operation.

Initially this working group has established that the motor power rating must be around 600 horse powers in order to meet the demand. This subsequently lead to the name V60 (“V” stands for “combustion engine” in German). The specification described a locomotive meeting most of the demands of light shunting duty.  The concept of the diesel locomotives for mainline service class V80 and V200 with the articulated drive shaft has proven its reliability. However, due to little experience regarding a power train resting on three bearings it was decided to employ the principle known from the V36 with drive rods and jack shaft.

The driving and coupled axles should be dimensioned not to exceed an axle load limit of 16 tonnes. The intention was to employ this locomotive also on poorly maintained secondary lines and industrial spurs. In mainline gear this locomotive should reach a maximum speed of 60 km/h, which is the same speed that was standard for long distance freight trains also utilising the then given speed limit on branch lines. The client also insisted on fool-proof handling. At a driver diameter of 1250 mm the revolutions at 60 km/h were 255 rpm, which was well within the standard limits for rod coupled engines. From today´s point of view it can be said that the engineers did not take any risks at all when developing the class V60.

The coal fired furnace was part of the standard equipment (the so called Dofa furnace). It only served for keeping a parked engine warm and not for pre-heating the coaches of the train. Since the coal had to be loaded manually the DB modified the design as from the third series and equipped the locomotives with oil burning furnaces.  Since the burner of the Dofa furnace was still utilised there is no outer hallmark differentiating locomotives of the third production run and earlier models. Locomotives of the fourth production run were equipped with an oil burning boiler with a circular cross section. Therefore these locos are clearly different to the previous models.

During the 1990-ies the DB replaced the boilers with electrical heating devices powered by external sources for keeping the engines at the right temperature. Thus the furnaces located at the front underneath the right hand walk way were removed. Other changes visible from outside was the installation of Indusi magnets (inductive train safety system) starting in the mid-sixties as well as the upgrading with automatic couplers of most engines as from 1985. Following the five pre-production units delivered in 1955 another 937 locomotives were built in five production runs until 1964. The pre-production units re different form each other as well as form the later production runs where most locomotives looked pretty much the same.

The DB subdivided this class internally into locomotives for light and heavy duty even though they look completely identical. The heavy type weighing 52 t has a reinforced chassis with somewhat larger dimensions compared to the light version weighing 48 t. Initially the light engines were marked with three-digit class numbers while the heavier type had four-digit numbers.  With the introduction of the computer numbering system in 1968 the light engines were classified as class 260 and the heavy ones as class 261.
Until the early 1980-ies both types had to be operated by specially trained locomotive engineers. At the same time the small shunting locomotives type Kö could be operated by specially trained shunting personnel resulting in lower personnel cost. In 1987 the DB reclassified these locomotives to class 360 and 361 and thus to locomotors and created a new job description for the shunting personnel trained to operate locomotors known as “engine shunting driver”. All locomotives equipped with automatic couplers (AK) and remote radio control were classified as class 364 (light version) and class 365 (heavy type).

The classes BR 362 and BR 363 were only established in 1992 and mark locomotives equipped with the Caterpillar engine 3412 DI-TA instead of the original Maybach GTO 6 / GTO 6A. Other engine types tested in some locomotives were not relevant in terms of their numbers. Meanwhile most engines have been operating for about 50 years proving the design of the V60 as quite successful. In the summer of 2012 a total of 405 engines of the classes 360 and 361 were still in service with the DB, some private operators or historical societies.

The main area of work has always been shunting service. Nevertheless they frequently operated local services to nearby industries in and around their respective depots (Bw).  Due to the lack of train heating equipment they were hardly used for passenger services since these services required suitable train heating.  However, particularly in the 1960-ies there were quite a few railway authorities running their V60s in ahead of “Thunder Boxes” equipped with coal fired furnaces. Regular passenger services were conducted in the districts of Augsburg, Nuremberg, Essen and Wuppertal.

After German reunification in 1990 the so called “West V60s” were also relocated to the new provinces despite the fact that the DR had 4-axle shunting locomotives (class 105 and 106) with similar performance data. In the 1990-ies class 364 and 365 locomotives have been deployed in the regions of Schwerin (Stralsund depot, Rostock, Pasewalk, Neustrelitz), Berlin (Berlin-Pankow station, Seddin, Cottbus), Erfurt (Erfurt station), Halle (Leipzig Süd station), Dresden (Dresden station, Chemnitz, Reichenbach).

Some class V60s were delivered ex works to the Belgian railways (SNCB-NMBS), the Greek railways (CEH) as well as to the Turkish state railways (TCDD) and also to Israel. After their decommissioning in Germany these reliable locomotives were very popular export products. Some of them were put into service in Switzerland, Norway, Yugoslavia, Italy and Algeria.