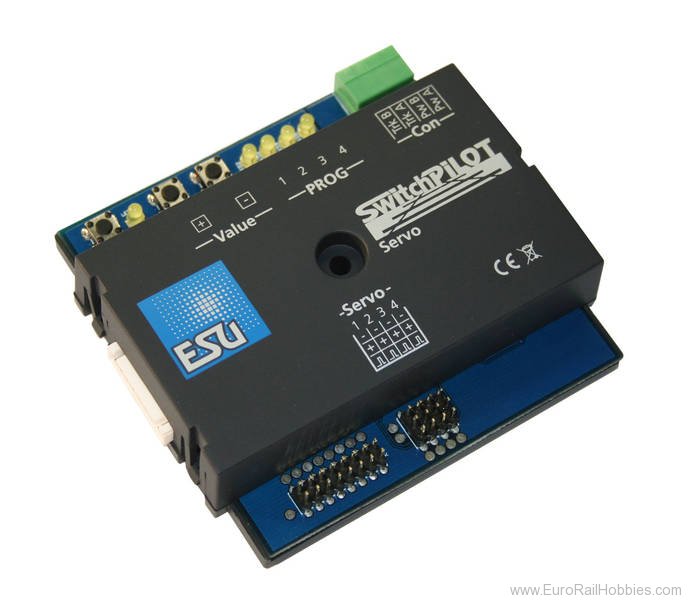 The SwitchPilot Servo is a masterpiece among accessory decoders: it was specifically developed for controlling up to four remote-controlled servo motors. The SwitchPilot Servo activates these actuators very precisely and thus is able to control not only switches, but also other slow motion sequences. The Switch Pilot Servo can be used with DCC or Motorola® protocols and due to its three built-in buttons can be programmed very easily. Set your layout in motion!

Modes of operation
The SwitchPilot Servo can be used with DCC or Motorola® protocols. It is compatible with the DCC norm and reacts to switch commands. It is possible to operate turnouts from 01 to 508 under Motorola® use. Recognition of control mode is fully automatic.

Functions
The SwitchPilot Servo is being powered either directly by the digital central station itself or separately by a DC- or AC source (transformer). RC servos or ESU servo motors can be directly connected to its four servo outputs. The 5V voltage needed as well as the special control impulse is generated by the SwitchPilot Servo itself. For each servo, not only lever speed can be adjusted individually but also its end positions. Thus it is possible to operate especially prototypically slow and powerful turnout motors, independent of track- and gauge systems. You could also employ the SwitchPilot Servo for driving signal arms or railway crossings. Also the automatic opening of engine shed doors does not need to remain a dream.

Programming
The SwitchPilot Servo can be programmed especially comfortably: For one it supports all DCC modes of programming including POM (programming in the main). Assuming a command station with an outlet for a programming track, all adjustments can be controlled and modified. As RailCom® is integrated, it is also possible to read out and control recent settings, even during operation. Alternatively you can use the comfortable three-button input: You are able to control addresses, the end positions of all four servos and the corresponding motion speed directly, during operation and without any complicated programming- at all command stations!

Analog operation
The Switch Pilot Servo would not be a typical ESU product, if it had not even more to offer: You can operate the decoder without the use of a command station! Conventional switches can be controlled with the help of eight switch inputs. Therefore fans of “classic” analog model railway can benefit from the advantages of the servo motor. In other words: the SwitchPilot Servo does not need a command station to switch and set servo paths as well as speed.

SwitchPilot Extension
Do you need some relay outputs in addition to the servo outputs, since you intend to polarize the frog, for instance, or switch off the track voltage within the signal line section? Then you should extend your SwitchPilot Servo with the SwitchPilot Extension relay module: one of its four twin-relay contacts switches simultaneously to the servo and can be used for potential-free load swichting – ideal for tricky circuitry!

Protection
As it has been the case with our loco decoders, in the design phase´s greatest emphasis has been placed upon near indestructibility of the SwitchPilot Servo decoders. That means ESU quality is also built into our stationary decoders, now and in the future! You can rely on it!