Advanced Search Options:
Category: Churches and Landmarks
< Go Back
< Previous
Product 14 of 17
Next > 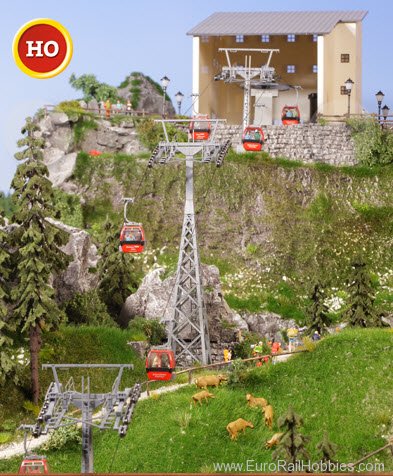 our price
$273.10 USD
Temporarily out of stock
(Available to order ) 
add to cart

The 1,712 metre high Hahnenkamm towers above the well-known Austrian winter sports resort of Kitzbuehel. Several cable railways lead to the skiing resort, the venue for the annual Hahnenkamm race. The valley station of the Hahnenkamm railway is right in the centre of Kitzbuehel, from where the 1658 metre high mountain station can be reached within 15 minutes. The cable car was built in 1996 as a monocable car. It overcomes a height difference of 872 metres over a distance of 2,356 metres. The gondolas accommodate 6 persons and offer a beautiful panoramic view of the Alps. Some of the gondolas bear the name of victorious downhill skiers of the international Hahnenkamm race on the strip. The strip is regarded as one of the most difficult and most dangerous racing courses in the world and has been the venue of the Hahnenkamm race since 1931. The BRAWA model will also bear the true-to-original lettering. The HO gauge Hahnenkamm cable car is a highlight of every model railway. It opens up the mountain world and invites you to go hiking or skiing.