Advanced Search Options:
< Go Back
< Previous
Product 1 of 1
Next > 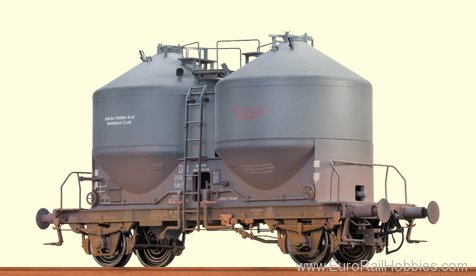 After 1945, the vast destruction of residential buildings and infrastructure led to a high demand for the transport of building materials. Due to the number of buildings that needed to be replaced and the lack of manpower, the order of the day was to build fast and cheap. Thus, concrete was the building material of this period â€“ this also occurred before the war, but not the same extent. One of the most important components, cement, was almost exclusively packed in paper bags and transported in covered trucks. This process was time-consuming and expensive. Tank cars for powdered materials such as coal dust had been available for some time, but their use was limited at that point to a few private adjusters. One of the reasons was that it was very difficult to completely empty the cargo, which caused many interruptions in loading and unloading. DB, jointly with the railcar industry, developed a new two-axle powder tank car with two standing containers. Westwaggon delivered the first ten cars to DB for inspection in 1953. Since they still had a Hik braking system, they were designated Kd 54. They also had a dual link suspension system, as did the next 150 cars from Talbot and Westwagon. Because of this, coupled with the very special undercarriage construction of the Kds 54, all subsequent deliveries received a simple link suspension system. After only 50 cars had been made, the container volume was 27 mÂ³. The cars proved so useful that a total of 1222 Kds 54s were ordered by 1964. In addition, a car was designed with a tank of 34 mÂ³ capacity and put into service as the Kds 56. In contrast to the Kds 54, which was RIV-compatible, the Kds 56 could only be used internationally under special agreements.