Advanced Search Options:
< Go Back
< Previous
Product 6 of 6
Next > 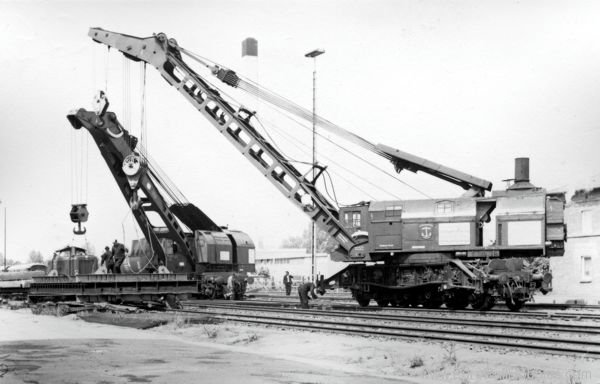 Please Note: Our KM1 Modellbau images may only show a representative model of a class/series. Please check the product description for actual color, era, details and other options for each stock number. Please contact us before ordering if you have any questions.

In 1949 the Company Ardelt released the Steam Crane with 57 tonnes capacity when in operation. This was the maximum load that a 6-axle vehicle was allowed, without exceeding the average axle load of 18 t,. This was a reasonable projection and a portable support width of 6 meters executable. In addition, could at this crane truck counterweights remain on the vehicle and did not have as its heavier sibling with 75 and 90 t capacity be removed and transported to a separate weight cars. Only the Lichtraummaß border chimney pot had to be removed and was lashed while driving back on the weights. For transport over longer distances the team in freight trains could be set up to a cruising speed of 80 km / h. Nevertheless, one could put 2 of these 57 tons of cranes, the heaviest locomotives back to the track. The crane truck has a total weight of 106 t, to prevent swiveling of the boom during the journey, it was preceded by a stake car with bracket as a protective car. The overall length of the vehicle combination on buffer was 22.6 meters. Crane boom movement was achieved with the steam crane on a reversible lying two-cylinder steam engine with 75 hp. Depending on the radius of the boom this vehicle could even unsupported even 23 t in track direction raise or alternatively even 15 t around. Thus equipped, the steam crane Ardelt was 57 t a popular and frequently used tool to track the DB. The onset of vehicles on the track, bridge construction sites and transhipments were his main tasks in difficult tasks even in the interaction of two crane units. In Auto-Technik Museum Sinsheim is still the crane 6601 "Karlsruhe" (ehem. DRG 735001 Mainz) preserved in museums and is the most-Spur1 friends certainly well known. This was in 1979 retired as a last copy of the series and is celebrating this year the 65th anniversary of its entry into service.

SPECIAL NOTE: You can produce the pictured scene of the two cranes operating together by order # 205802 and 205812. This will be the MOST IMPRESSIVE display on a 1 Gauge Layout!