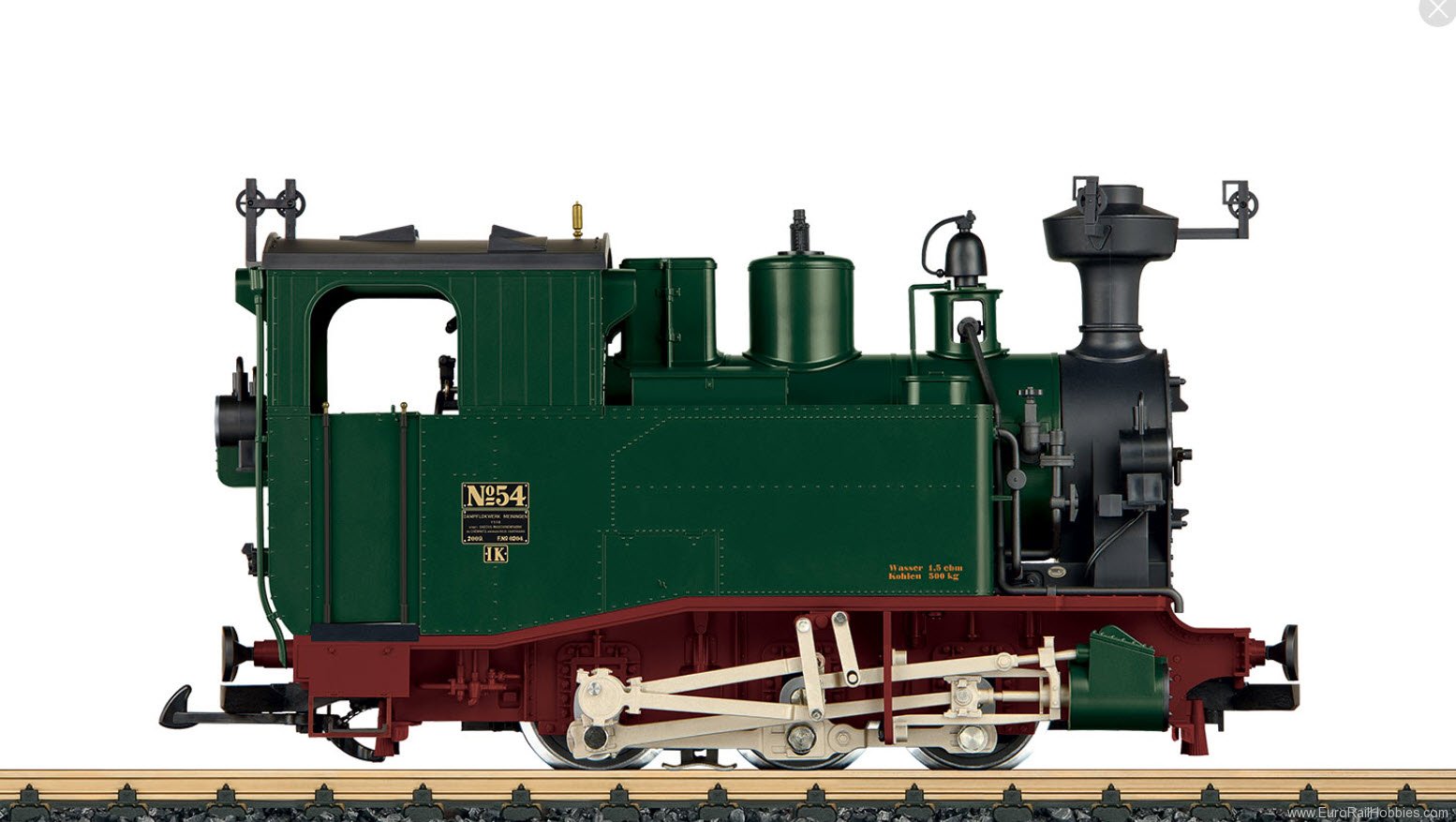 Steam locomotive Saxon IK (new building). The new machine was officially commissioned on 04.07.2009 Radebeul in operation and has since been used on the Pressnitztalbahn, Saxon wrong but also on other narrow gauge railways. The model of the locomotive is a new design and features traction tires, a DCC interface, built-cab lighting and smoke generator. The top signal with direction of travel. Drive with a powerful engine on all axes.

IK-Saxon for her first narrow gauge railway from Wilkau-Hasslau to Kirchberg (750 mm) purchased the Saxon State Railways 1881 at Hartmann in Chemnitz four small compact three couplers, which were performed later as a species IK. The machines had to make only a Gesamtradsatzstand of 1,800 mm, but received a relatively large, zweischussigen boiler. Their characteristic appearance, they were given by the large, conical chimney with Hohlfeldschem spark arrester, however, was replaced in subsequent deliveries by Kobel chimney. Allen was within the sheet metal outer frame and the outer Allan control with slide plates and the drive by Hall shear cranks. With the growth of narrow-gauge lines Hartmann delivered to 1892 a total of 39 specimens of this type in the Saxon Railroad. Five machines received 1889-1891 private-Zittau Oybin-John Dorfer Railway (ZOJE), which was acquired in 1906 by the state railway. Trial basis in 1886 and 1888 four of the state railway IK with a Klien-Lindner axle hollow had been delivered to address the high wheel flange and rail wear. They were given the generic name Ib K. Small differences between the series there was also delivered to the boiler constructions.After the first world war in 1919 than five machines had to be given reparations to Poland. Until the introduction of the final DRG renumbering plan of 1925, a total of 12 locomotives were retired. The remaining ranked as the DRG 99 7501-7527 in its substance, but they all looked out to 1928. Two of the machines were delivered as reparations after the occupation of Poland in 1999 as 2504 and 2505 for a short period in the existence of the DRG. Old age, however, reached the No. 12, which was sold in 1923 as a locomotive to work the iron Schmiedeberg and is driven there until 1964. An interesting project called 2005, the Association for the Advancement Saxon narrow gauge railways (VSSB) to life: The construction of a "Saxon IK" with the locomotive number 54 is a milestone in the Saxon narrow gauge railway history has been brought back to life. Involved in the construction companies presented the VSSB their knowledge, work performance, as well as high cost of materials either free or for only a small fraction of the costs available. Thus, the financial expenses decreased during the construction of IC No. 54 of the estimated a�� 1.5 million at the end only about 800,000 a��, which were applied exclusively by private donations. The assembly of about 4,400 items were made in Saxony on 16 January 2009 in the famous steam locomotive DB-Meiningen. Exactly five months ago, the machine at its first steps. On 4 July 2009, the "new"-IK No. 54 officially put into operation in Radebeul. Since then, it is set in the Pressnitztalbahn, but comes in other Saxon narrow gauge railways used.